Need a new smartphone for Christmas? Here are a few suggestions. 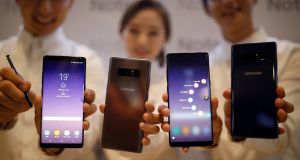 If you don’t mind compromising on some things, you can get a decent phone for relatively little cost.

Remember years ago when we all had Nokia phones? When the 3310 first came out more than 15 years ago there were no cameras in phones, and 3G internet certainly wasn’t a thing. On the other hand, you didn’t have to charge it twice a day, and it had that old gaming classic Snake. The updated version offers 3G, a 2 megapixel camera and brings back Snake to your handset. And it only costs €60

This one is only for Vodafone customers. It may be budget in price but the Smart N8 is more strays towards the higher end of that in its specs - a 13 megapixel camera, a five inch 720 x 1280 screen and it comes with Android 7 built in. There’s 16GB of storage on board, which can be expanded with a memory card up to 32GB in size. There’s only 1.5GB of RAM, and the quad core processor clocks in at 1.3GHz.

Another network exclusive, the Three Prism HD costs under €100 and will do everything you expect from a low-cost Android phone. Shelling out the extra €20 for the HD version means you get a better screen and a bumped up camera - 8 megapixels versus 5 megapixels for t the rear facing camera. There’s only 8GB of storage space, but you can expand that with a memory card for a little extra. Don’t expect miracles from the phone though; there were some frustrating moments with the touch screen, and the speaker wasn’t the best for handsfree calling in our experience.

Sony’s Xperia range spans a spectrum from the high end flagship XZ Premium all the way down to the budget devices. The L1 sits at the cheaper end of the scale, but it still offers a lot. From a 5.5 inch screen to a 13 megapixel camera, the L1 is a bit of an all-rounder. The 16GB of on-board memory can be expanded by another 256GB with a compatible memory card, and it comes with Android Nougat - or Android 7 - preinstalled.

Huawei’s handsets won’t exactly break the bank, but if your needs are modest, you can get away with spending even less on your device. Take the P8 Lite, for example. It doesn’t have the dual camera that you get on the flagship Huawei handsets, but it has a 12 megapixel rear facing camera and 8 megapixel front facing camera for selfies. It also comes with a 5.2 inch HD display, so your photos, videos and other media will look great. On the storage side, there’s 16GB of memory on board, but the you can expand that by another 128GB with a micro SD card.

It’s becoming a little more difficult to define what a mid-range phone is these days. But here are a few options that aren’t exactly inexpensive, but won’t break the bank either.

The Galaxy range isn’t just about the S8 or the Note; there are more affordable options in there too. The J5 is an acceptable all-rounder. The camera won’t stand up to the flagship devices, but it will take decent photographs, allow you to browse the internet, give you enough space to install some apps, and enough power to do it all at a decent pace that won’t have you screaming in frustration. It has a Super AMOLED 5.2 inch touchscreen, 16bmegapixel camera both front and rear, and 32GB expandable storage.

Did you ever think you would see the day when a smartphone with a 4.6 inch touchscreen was described as “compact”? Well, this is where we’re at. The Xperia X packs a lot in though, from a 23 megapixel camera to a hexa core processor. Plus it benefits from all that Sony imaging expertise.

Another of Vodafone’s own-brand phones, the V8 takes things up a notch. It has an octa core processor and 3GB of RAM, a 5.5 inch HD display and 16 megapixel camera. It also offers fingerprint security features, and a secure area to store passwords, files and photos you want to keep private.

The iPhone SE is the phone for those who dislike the shift to larger screens and long for the days of the 5S. The SE takes the screen back to 4 inches, but keeps some of the advances later iPhones made - including the camera improvements. It shoots video in 4K, offers 12 megapixels for still images and has 32GB of space to store things.

If money is less of a concern, you can spend more to get better features, from improved cameras to more storage.

There are plenty of reasons to go for the Samsung Galaxy S8+. The 6.2-inch Quad HD screen is stunning, with the curved display fading away into an almost imperceptible bezel. It’s waterproof and dust resistant, and comes with a lot of power packed under the hood. The octa-core processor makes sure that everything runs smoothly, while the 64GB of space inside can be expanded further if you need it - and you will, if you use that 12 megapixel camera and video function to its full ability. Full review is here.

The premium version of Sony’s flagship XZ may be lovely to look at, but there’s plenty of substance to it too. From an excellent camera - both still and video - to plenty of RAM to keep you ticking over, the XZ Premium is trying to cover all its bases here. Check out the full review

If you are feeling flush, the iPhone X is the only Apple device to go for. Aside from the excellent dual camera and the fancy extra like Face ID, it has one thing you’ll only get on the X - animoji. You too can do karaoke as an animal emoji and share it with the world. If that doesn’t do it for you, the practically bezel-less screen might, or the 4K video camera. Be prepared to dig deep though. Full review here.

*Prices quoted are prepay or sim-free