This week we’re talking about . . . flying and the electronics ban

Without laptops or iPads, prepare to return to the boring, bad old days of air travel 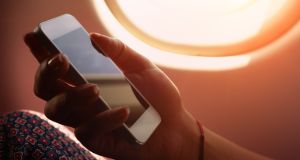 Screen grab: anything bigger than a smartphone will be banned from the cabin of many flights. Photograph: iStock

Flying used to be an event to look forward to, back in the days when low-cost airlines were unheard of and air travel was a luxury few could afford. Now, it’s a stressful experience, as increasing security restrictions are placed on travellers in response to perceived threats. Laptops out, shoes off, into a body scanner, maybe suffer through a pat-down, have your hand luggage swabbed and inspected by over-enthusiastic gate staff who make you check the bag at the gate, fight your way to your (possibly) pre-assigned seat and hope there is enough room to stow your hand luggage overhead, clutching your one-litre clear plastic bag with your mini-shampoo, shower gel and embarrassing ailment cream in your hand, having had to ditch your bottle of water before security.

As if the liquids ban wasn’t annoying enough, now travellers face having to figure out which of their electronic devices can no longer be carried on board flights to and from certain countries. Airlines were given until today to impose the new restrictions on US flights, and the UK wasn’t far behind in announcing its own limitations.

If you are flying from any of a number of airports in certain countries – Saudi Arabia, Jordan, the United Arab Emirates, Qatar, Kuwait, Turkey, Egypt and Morocco – directly to the US, you can no longer take large electronic devices into the cabin with you. Instead, you’ll have to check them along with your bag.

You’ll notice there are no US airlines on that list, and that’s because none of them fly to the US directly from the affected airports. The restrictions, which are in place indefinitely, will apply to all passengers on the flight regardless of whether they are US citizens or not. They won’t however, apply to airline crew, nor will they apply to passengers leaving the US.

As for the UK, it has imposed similar restrictions for flights from Saudi Arabia, Jordan, Turkey, Egypt, Tunisia, Lebanon and Morocco. Some 14 airlines are affected, including British Airways, EasyJet and Turkish Airlines.

What do they mean by ‘large’ electronics?

Basically, anything bigger than a smartphone. That means your iPhone 7 Plus will make it on to the flight without raising an eyebrow, but a Kindle, iPad, portable DVD player (if you still use one), laptop or camera will have to be packed into your checked bag.

Authorities have blamed credible security threats for the decision to ban these devices from the cabin. There are no details on any specific threats, but, announcing the ban, officials said there had been reports that terrorists wanted to use consumer devices to smuggle explosives on board planes.

What about Irish flights?

As of this afternoon, the Department of Transport still hadn’t indicated that it would follow the lead of the US and the UK. In fact, on Wednesday it ruled out such a move. That doesn’t mean that the Government won’t change its mind though. If other countries follow the US and UK lead, airlines might find that the expensive in-flight entertainment systems on their long-haul flights get a bit of a battering.

If you are planning on travelling to any of the countries affected, you may need to rethink your plans for bringing devices with you. Perhaps it’s time to return to the world of paper books – ebooks are overrated anyway, though you could still access them on your smartphone – or even to take the chance to switch off completely, to contemplate the meaning of life while you are crammed into a metal tube thousands of feet in the air for long periods of time.

In the meantime, take a look at the Royal Jordanian Airlines tips for doing a 12-hour flight without a laptop or tablet.