Major rise in spending on Internet of Things predicted for 2018 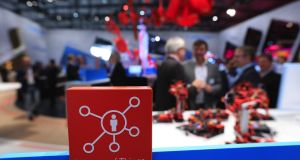 An Internet of Things logo at a tech fair in Hannover, Germany. IoT spending is predicted to surpass the $1 trillion mark in 2020. Photograph: Getty Images

A major increase in spending in the areas of Internet of Things (IoT) and enterprise security is predicted for 2018 in the latest raft of forecasts for the tech sector next year.

Worldwide spending on IoT is expected to rise by almost 15 per cent in 2018 to $772.5 billion from $674 billion this year, according to research firm IDC.

IoT is the generic term generally used to describe a world in which everyday items are connected to the internet. IDC forecasts spending in this area will increase by a compound annual growth rate (CAGR) of 14.4 per cent through the 2017-2021 period, surpassing the $1 trillion mark in 2020 and reaching $1.1 trillion in 2021.

IoT hardware spending will reach $239 billion, with the majority of expenditure seen to go on models and sensors. Services will be the second largest technology category in terms of spending, followed by software and connectivity.

Software is tipped to be the fastest growing technology segment with a five-year CAGR of 16.1 per cent, led by expenditure on application and analytics software.

“By 2021, more than 55 per cent of spending on IoT projects will be for software and services,” said Carrie MacGillivray, vice-president, IoT and mobility at IDC.

“Software creates the foundation upon which IoT applications and use cases can be realised. However, it is the services that help bring all the technology elements together to create a comprehensive solution that will benefit organisations and help them achieve a quicker time to value.”

The manufacturing sector is tipped to lead the spending on IoT solutions next year, followed by transportation and utilities.

Consumer IoT spending will likely reach $62 billion in 2018, making it the fourth largest industry segment. The leading use cases will be related to the smart home, including home automation, security, and smart appliances,” said IDC.

Separately, technology research company Gartner forecasts that spending on enterprise security will reach $96 billion next year, up 8 per cent on this year. The increase in spending is linked to a rise in regulations such as the General Data Protection Regulation, a shifting buyer mindset, a better awareness of emerging threats, and a move to a digital business strategy.

Gartner forecasts that by 2020 more than 60 per cent of organisations will invest in multiple data security tools such as data-loss prevention, encryption and data-centric audit and protections tools, up from approximately 35 per cent this year.