Twitter is ‘fundamental’ and will ‘endure forever’ - Jack Dorsey

On Dublin visit, social network founder says revenue will follow when company does ‘the right things’ 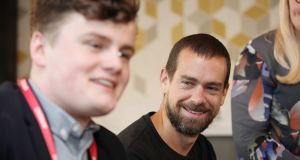 “If there is one word that represents Twitter, I think it’s ‘open’.” Twitter founder and chief executive Jack Dorsey is talking about the social platform’s culture. “If it’s two words, it’s ‘open’ and ‘fast’.”

Twitter has been through a turbulent time in recent months. Job cutbacks, executives departing and a restructuring of the business as the platform tries to grow its user base and avoid stagnating have all given the impression of a company in a state of flux.

Predictions of its demise seem to have been a bit exaggerated though. Dorsey is confident Twitter will be sticking around for the long haul.

“I think Twitter is a company that endures forever. It lasts because it’s fundamental,” he said.

“We’re going to make the time and take the time necessary to do the right things for people using the product and our advertisers. The revenue follows.”

Speaking at the company’s Dublin headquarters, Dorsey is fresh from London and the launch of his other company, Square, in the UK.

In its 11-year history, Twitter has seen some changes, but the most significant Dorsey says, was the introduction and application of machine learning to the timeline which shows more relevant tweets to users rather than a simple chronological order. That increased engagement among users significantly.

But as with any community, there are downsides and elements that users might prefer to avoid. One of the chief criticisms of Twitter as a platform relates to the problem of abuse and trolls. The company has clamped down recently on harassment, introducing new measures to ensure that those engaging in harassing behaviour find their reach limited, with Twitter monitoring its platform to try to identify those users instead of waiting for the complaints to roll in.

Dorsey says the issue was identified as a priority at the start of the year.

“We said drop whatever else you’re doing and work on this until it’s fixed.” Fixed, Dorsey says, means detecting a sea-change on Twitter; working towards that entailed shipping something every day – a product, a feature, an update.

Some of the measures are starting to pay off, but Dorsey admits it’s an ongoing battle.

“We’re happier,” he says. “It’s going to be a continuation. We’re never going to be done. People are going to find new ways to harass people, as they do in the real world.”

He compares Twitter as a communication channel to the telephone: people will always find new ways to abuse others through it. But some trolls have already dropped off, he says, finding Twitter is “less fun” now they no longer have the impact that they once did.

Dorsey acknowledges that in the past the company put too much of a burden on the victim of abuse in terms of reporting it, which he says wasn’t fair. Like the revamped timeline, Twitter is now using machine learning to take some of that burden away, identifying patterns of behaviour and applying sanctions to accounts deemed to be abusive.

“I think we were unfairly amplifying – just by the very nature of our service – harassing voices,” he says.

Could the next step for Twitter be a subscription version of the site? Dorsey said he hasn’t ruled it out, and the notion is an interesting one. However, it will have to complement the existing advertising business.

“We want to keep an open mind and always learn,” he says. “It’s just a germ of an idea, nothing serious yet.”