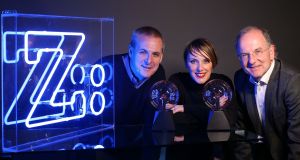 Jet.com’s Mike Hanrahan (left) at the launch of Career Zoo with Jackie Slattery and David Ryan: “One of the big assets for Jet was the culture, the technology, the people.” Photograph: Marc O’Sullivan

When Irishman Mike Hanrahan moved to New Jersey seven years ago, it was to work with a start-up that sold soap and nappies.

The start-up was founded by Marc Lore and the pair had worked together in London at Credit Suisse before Lore set up Diapers.com, later renamed Quidsi. It’s hardly the stuff of high tech yet it would prove to be a lucrative move for Hanrahan, who is originally from Co Wexford. Lore sold Quidsi to Amazon for $545 million and Hanrahan took a couple of years out of the workplace after his family expanded from two children to four, with the birth of twins.

“We had four kids under the age of five and no real support network. My parents came over as much as they could, but that was three times a year. We needed it,” he says. “I was lucky to be in a situation where I could do that. We said there was no point leaving the money in a will, why not spend the money now. I’m glad I did it.”

While living off savings may be nerve-wracking for some, Hanrahan always had a back-up plan.

“The technology sector was booming. I was lucky in that I was never going to be short of a job,” he says. “Worst-case scenario , I had worked in banking and finance in London for a long time, and they were clamouring for people like that in New York.”

It wasn’t needed. When he returned to work, it was to a new start-up, ecommerce firm Jet.com. The company had one aim – to reinvent ecommerce with a new model that would see the prices of items drop as consumers shop.

The businessman found himself in the headlines last year when Walmart paid more than $3 billion for the company he cofounded with Marc Lore and Nate Faust.

Hanrahan is currently chief technology officer for Jet.com, which was founded in 2014. He doesn’t say how much the Walmart deal netted him personally, but he has no plans to retire just yet. There’s a lot more to do, he says, and Jet is just getting started.

It’s a role he has relished from the start, with about 14 months to get the technology ready before its launch.

“We knew it was going to be a big splash, coming out of the gate all guns blazing. There was a lot late nights, a lot of weekends getting the technology ready, load testing and seeing how we would scale it,” he says. “It was a lot of fun. As an engineer, as a CTO, it was a dream job. I was being given the remit to run a multibillion-dollar marketplace, starting with a completely clean slate, and you’re being told that it needs to scale massively on day one. To build the technology to match those requirements was a real blast.”

Among the tools Jet.com used was the public cloud – specifically Microsoft’s Azure. Luckily, it all went smoothly on launch day, despite some unexpected events.

“Marc got himself on to Good Morning America on the day of the launch, which wasn’t factored into our estimates for traffic and we ended up with a 8x spike over our best estimates while he was on air,” he says. “Everything held up beautifully. We were nervous though.”

It wasn’t long before the company came to the attention of Walmart – which Hanrahan says was surreal – and the rest, as they say, is history.

Despite becoming part of the behemoth that is Walmart – it also owns Asda in the UK – Hanrahan says that not a lot has changed at Jet.com since the acquisition. Not in the company’s culture anyway; it’s inevitable that being part of a larger entity would bring some benefits to the business, and Walmart certainly has that end covered.

Before the acquisition, Jet.com was estimating it would be profitable by 2020. While Hanrahan isn’t talking about the current estimates – Walmart is a publicly listed company so he is conscious of talking out of turn – he says the scale of the company makes things a little easier.

“As part of Walmart you get access to better cost of goods from suppliers, so margins are inevitably going to improve,” he says. “In terms of the goals we set ourselves in terms of customers and gross merchandise value sales, we were – and are – flying.”

Ecommerce in the US is a funny game. While Irish shoppers are used to having access to online grocery deliveries from the local supermarket, the size and geographical footprint of the US makes that a little more difficult. Then there’s the Amazon factor to deal with.

“If you want to play in the ecommerce space in the US, you have to have a value proposition that is up there with Amazon,” explains Hanrahan. “That costs a lot of money. Amazon has scale, so they get huge leverage out of everything they do, in terms of technology and fixed overheads. You have to hit that level of scale to eat really.”

The financials aside though, you would expect Walmart to impact the culture of Jet. But the brand operates as a standalone entity within the group, and it has been left largely untouched, despite initial fears the acquisition would see a gradual melding of the two brands and workforces.

“One of the big assets for Jet was the culture, the technology, the people. They’re being very careful not to disrupt that or be seen to Walmart-ise Jet in any way, shape or form,” says Hanrahan. “They [Walmart chief executive Doug McMillan and Marc Lore] have been very deliberate and careful in making sure they don’t upset the apple cart at Jet. Obviously there was apprehension and nervousness when the deal was going on, about whether we would be inundated with Walmart people, was there going to be this bureaucracy etc, and it really hasn’t played out like that at all. The remit is that we can do that on our terms.”

Between warehouse staff, call centre and support, Jet.com employs about 2,000 people, growing from 15 in 2015, and has 8,000 suppliers, its own distribution centres and 22 million stock items. It even has a small staff in Ireland who work on the technical side of things – about 20 people currently, but the company is always hiring, and had a presence at the recent career Zoo event in Dublin to prove it.

But before you get visions of another low-cost alternative to Amazon or the regular grocery firms in Ireland, Jet.com is solely focused on the US and Hanrahan says there are no plans to change that.

Having development staff in another time zone makes sense, he says. It means things can be tested at a time when it’s unlikely customers will be trying to make purchases in large numbers, and if something goes drastically wrong, it can be rolled back before most of the customer base wakes up – usually that means testing it at 4am.

The company is in recruitment mode for Dublin. “It’s going to be an engineering centre for us,” says Hanrahan. “The initial impetus for the idea was because all our engineers were in Hoboken [New Jersey] they were basically getting woken up a lot at night. they were starting to experience burnout.

“On the flip side, we didn’t want to have just an operations ‘keep the lights on’ centre. We wanted to extend the working day.”

Then there was the chance to expand its hiring pool away from the competitive New York environment. Dublin was a natural choice for the company, Hanrahan says.

“It’s been hugely successful for us,” he says. “When we meet great people, we want to hire them. We’re going to roughly double the technology team at Jet over the coming year; the mix of Dublin and Hoboken. We’ll see how that plays out.”