Tech review: Galaxy Note 8 a return to form for Samsung 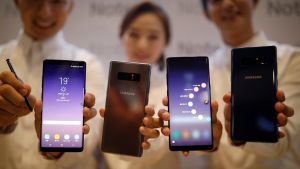 Samsung Galaxy Note 8: impressive display and cameras but the decision to run the device on a smaller battery is sure to have an impact on performance. Photograph: Kim Hong-Ji/Reuters

Where to buy: Carphone Warehouse.ie

Consider this review a preliminary one. The Samsung Galaxy Note 8 is officially on sale tomorrow and at the moment there are very few of the handsets doing the rounds in Ireland. So my time with this one was fleeting: a few days rather than weeks, enough to discover that I like the concept and to show up some niggles, but not enough time for serious problems to make themselves obvious.

A cautionary tale was last year’s Note 7. Although the reviews were great, battery problems soon emerged with overheating leading to recalls. Samsung has taken steps to make sure the same issues don’t arise with the Note 8 – it has a smaller battery for a start, and there are more stringent battery checks with this version. That should go some way to allaying any fears that the Note 8 will present any of the same issues, as should the successful launch of the Galaxy S8 and S8+.

To sum it up in one sentence, the Note 8 is a return to brilliance for Samsung. It is beautifully designed, with a fantastic 6.3 inch AMOLED screen. Under the bonnet, it has 6GB of RAM and 64GB of storage space, which can be expanded with a memory card up to 256GB in size. And of course, it has the S Pen stylus, which seems even more accurate than before.

First up: the display. It’s quad HD+ resolution, which means crisp text, great movies and some pretty amazing colour reproduction. The “infinity display” that Samsung has been pushing recently is also very much in evidence here, with the Note 8 getting those slightly angled edges. But that 6.3 inch screen means it looks long, although in reality it isn’t a huge leap, mainly due to the smaller bezel on the phone.

Where you will feel it is with the fingerprint reader, which is just a little awkward to reach comfortably on the rear of the device.

The Note used to have the big phone market almost to itself. But that has changed in recent years as more companies cotton on to the fact that big screens can actually be useful. However, the biggest competition Samsung may have could come from an unexpected source: itself. The Samsung Note 8 follows the launch of the Galaxy S8 and S8+, with the latter certain to eat up some of the Note’s previous market.

Just an observation on the design: the Note used to stand out from the rest of Samsung’s range, mainly due to its larger than average size. But, with the launch of the Galaxy S8+, that has blurred somewhat. Sure, the Note 8 is less rounded than its S8 siblings, but the design is certainly familiar.

Another differentiation between the handsets is, of course, the S Pen. Samsung’s stylus is back, and it’s still useful. You can use it to scribble notes on the screen – including when the phone is in standby – create GIFs, annotate screenshots, and access shortcuts. It’s compact, but if you move the phone too far away from the S Pen, it will trigger an alert, meaning you are less likely to leave it behind. When using the Note 8 as a work tool, the S Pen came in handy more often than I thought it would.

The Note 8 also gets a dual camera on the rear, with 12 megapixel resolution and an aperture of f1.7. That means good low-light images. And when you team it with the optical image stabilisation, the results are impressive. The second sensor gives you some flexibility, mainly with distance from your subject.

There are some issues to note. The smaller battery has an impact. It won’t last as long as other phones, but it did make it through the day reliably with some heavy use. As previously mentioned though, this was a time-limited review and it would be interesting to see if the Note 8 kept up the performance on a day-to-day basis. Turn off the always-on display and you’ll see a difference; ditto with messing around with the screen resolution.

The display. I could look at it all all day – or at least until the battery gave out. The S Pen is also a useful tool and the cameras are impressive.

Caution has ruled that the Note 8 run on a smaller battery. No one wants a repeat of the Note 7 debacle, but that decision is still going to have an impact on users. Also, the Note 8 comes with a serious price tag – around €950. Dig deep, Note fans.

Inside the box you get the usual: headphones, USB cable, USB plug. But the Note 8 is USB C, so Samsung has included two adapters in the box: one for turning your old micro USB cables into USB C, and a full-size USB to USB C adapter.

The Note 8 could be a great comeback for the brand, but the cost may turn off some potential buyers – especially when the S8+ is waiting in the wings.