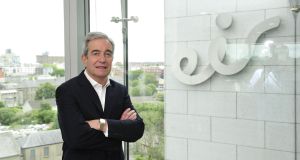 Eir’s main shareholders are set to sell a 64.5 per cent stake to two companies controlled by French telecoms billionaire Xavier Niel in a deal that values the phone group at €3.5 billion.

The Irish Times first reported in September that Mr Niel, who founded France’s first internet services provider in 1993 before selling it for the equivalent of €58 million on the eve of the bursting of the dotcom bubble in 2000, was circling Eir, using an investment vehicle called NJJ Capital.

Eir confirmed on Wednesday that Mr Niel will use NJJ and Paris-listed telecoms company Iliad, in which the entrepreneur owns a 52 per cent stake, to acquire the Eir stake, subject to regulatory approvals.

Current Eir shareholders, US hedge fuds Anchorage Capital and Davidson Kempner Capital will also remain shareholders in Eir, though Singaporean sovereign wealth fund GIC, which built up a 20.6 per cent stake in the company last year, is exiting.

The deal is being constructed by way of all the continuing investors using a vehicle called Toohil Telecom Holdings to acquire 100 per cent of Eir’s holding company. The value of the transaction is being put at €3.5 billion, including Eir’s debt.

Iliad, which is taking a 31.6 per cent stake in Eir, has an option to buy out 80 per cent if NJJ’s holding in 2024 at a 12.5 per cent discount to “fair market value” . This would give the Paris-listed group a controlling interest of almost 59 per cent. Up until then, Iliad will run its interest as a financial investment with no management involvement in Eir, executives at the French company said on an analysts call on Wednesday.

Eir should start to pay dividends to the shareholders from 2019, they said.

A deal, subject to Irish and European regulatory approval, would mark the seventh change in ownership for Eir in less than two decades. The former State-owned company racked up €4.1 billion of debt through a series of changes in control before it filed for examinership in 2012, resulting in €1.8 billion of its borrowings being written off.

The debt restructuring resulted in senior lenders to the former State telecoms monopoly seizing control of the business. Subsequent trading in the shares saw three investors accumulate more than three-quarters of Eir’s stock between them. It was reported earlier this month that Eir’s top management team, including Mr Moat, are set to receive a windfall of up to €210 million if a “change of control” clause is triggered by the deal.

However, Eir bond documents show it may be difficult to establish if a change of control event, which would also prompt repayments on the company’s €2.3 billion of borrowings, has actually occurred. Change of control is described in Eir debt contracts as a sale of “all or substantially all” of the assets of the group, but “there is no precise definition of the phrase under applicable law”, according to the company’s latest annual bondholder report for the year to the end of June.

In September 2014, Eir abandoned plans to float on the stock market for a third time, as its creditors-turned-owners concluded they would make more money by holding on to their investment in a company that, at the time, was grappling with declining sales from as far back as 2008. The company has since returned to revenue growth under Moat.

The French deal will put paid to Eir management’s aim of reattempting a flotation as early as next year.

Mr Niel, whose net worth is estimated by Forbes to be $8.9 billion (€7.5 billion), is co-owner of French daily newspaper Le Monde and has a controlling interest in Monaco Telecom.

1 Former junior minister Michael D’Arcy did not contact ethics watchdog over new job
2 Three Ireland switches on 5G network around the country
3 Mortgage breaks will not be extended beyond this week
4 Pilita Clark: The looming legal minefield of working from home
5 State should use Covid-19 impact on building costs to build homes
Real news has value SUBSCRIBE