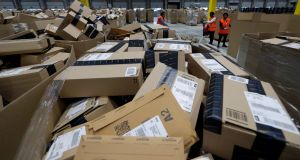 The EU last week reached an agreement to make cross-border parcel delivery services more transparent and affordable and to increase regulatory oversight of the market.

The European Union is taking steps to make cross-border parcel delivery services more affordable after new figures show that only a handful of small businesses are selling their products online.

According to new figures from Eurostat, the EU’s official statistics body, just 16 per cent of enterprises employing at least 10 people received online orders from either other businesses or consumers.

Fewer than half of those companies that sold online last year conducted business with customers in a member state other than their home country. Just over a quarter generated orders from outside the EU.

Part of the problem is due to linguistic barriers and the cost of deliveries.

The EU last week reached an agreement to make cross-border parcel delivery services more transparent and affordable and to increase regulatory oversight of the market.

The new regulation will force parcel delivery providers to more clearly disclose prices. In addition, national regulators will be given new powers to identify better providers.

Despite EU worries about the figures, Ireland fares well in the study, ranking highest in terms of enterprises generating sales online, with 26 per cent of firms reporting online sales. It was closely followed by Sweden and Denmark with 25 per cent and 24 per cent respectively.

At the opposite end of the scale, web sales concerned one in 10 enterprises or fewer in Romania, Bulgaria, Poland, Italy and Latvia.

The figures show 74 per cent of Irish enterprises are online. Some 90 per cent of online businesses here have made sales in Ireland, slightly lower than the EU average.

Just over half of Irish companies have sold to other member states, while 41 per cent have generated online orders from non-EU countries. This compares with an EU average of 44 per cent and 28 per cent respectively.

The provisional agreement reached by the European Parliament, the European Council and the European Commission needs to be finally approved by the parliament and the council. It is expected to formally enter into force at the beginning of next year and it will be fully applicable in 2019.