Reports of net neutrality’s death in US greatly exaggerated 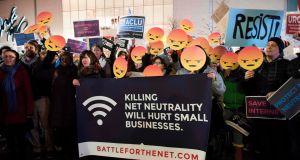 Confused after the the vote in the United States last week by the Trump-era Federal Communications Commission (FCC) to remove net neutrality protections put in place by the previous, Obama-era FCC? Join the rest of us struggling to figure out what happens next.

Net neutrality is the general principle that all internet traffic should be treated equally. It can be implemented in various ways but content, applications, websites, apps and communications should travel the net’s electronic highways without any “gatekeepers” deciding that some traffic should be shunted into a slow lane, while other, privileged traffic can accelerate into a fast lane.

So, a low-bandwidth email and a high bandwidth stream of Game of Thrones should have equal access to the net’s pipes. Businesses aren’t forced to pay more to deliver high-bandwidth content, and consumers don’t need to pay extra for the delivery of some of their services.

Or that’s how it used to be in the US, ever since the public internet came into being. In 2015, the FCC decided to set down rules to preserve this approach, including taking the step of redefining the internet as a utility. Doing so introduced stronger restraints on what internet service providers (ISPs) could do. ISPs were not happy. They had long lobbied for fewer restrictions on their activities and the end of net neutrality.

Now that the FCC has given ISPs just that, what will they do? And what will the FCC vote mean for how the net functions?

No one has a clue.

Analysis of the internationally-watched vote is widely varied and often, politically partisan. And much has happened in succeeding days to raise the question of whether the vote will stand.

On top of all that, the vote isn’t like the lever on Graham Norton’s red chair, summarily ejecting US net neutrality. The FCC’s 2015 rules are going, but internet providers are likely to try to introduce any significant change only gradually.

If they even get the chance to try.

Immediately following the vote, US Senate Democratic leader Chuck Schumer announced he would force a vote on a Bill that would giveth back what the FCC taketh away, and reinstate net neutrality.

However, this effort seems unlikely to go anywhere, given the (slim) Republican majority in the Senate. That said, at least one Republican – Maine senator Susan Collins – has opposed the FCC’s net neutrality shutdown. But, even then, anti-net neutrality Donald Trump has the right to veto a passed Bill.

This week, a Tennessee Republican introduced a Bill that would see Congress itself legislate for net neutrality and remove that oversight from the FCC. But though Marsha Blackburn’s Bill would disallow ISPs from blocking or throttling some net traffic – and, she claims, thus “settle the net neutrality debate” – net neutrality advocates pointed out the Bill would permit pretty much everything else the FCC voted to allow ISPs to do.

On a third front, New York attorney general Eric Schneiderman is leading an attempt by a dozen or so state attorneys general to sue over the vote. The presumption, according to news site Ars Technica, is that the attorneys will go after the FCC’s controversial insistence that its net neutrality vote pre-empts state and local laws.

The state attorneys will likely argue that the FCC cannot override individual states from enacting their own net neutrality legislation, or water down state consumer protections or business transparency requirements.

Given that the FCC’s repeal won’t take effect until 60 days after publication of the vote result in the Federal Register (the official journal of the federal government), and that many weeks often pass before submission for publication, it could take three to four months for the repeal to become real.

That’s the window in which the proposed Bills are likely to be voted on and in which the attorneys intend to file their suit. So, while the vote has happened, many wild cards are in play. We may have seen the end of net neutrality in the US. Or we may not.

Thankfully, we still have net neutrality in the European Union. Critics have rightly argued that it isn’t the perfect version of net neutrality. A key criticism has been EU tolerance for “zero rating”, where some network operators don’t charge subscribers for data traffic on selected apps and services. That needs to be addressed (and EU regulators are currently examining the practice).

But our net neutrality is sure looking pretty good right now, compared with the uncertainty in the US.

The EU’s net neutrality is also highly unlikely to be jettisoned, à la FCC. Europe doesn’t have a similar regulatory body capable of such a unilateral decision. And why would the European Parliament axe a popular principle that had both business and consumer support?

If anything, any reconsideration would surely lean instead towards tightening the loopholes in existing legislation.