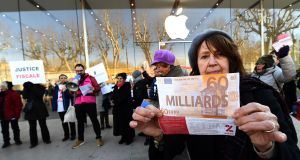 Protesters in France outside an Apple store: Apple has reached a deal with French authorities to pay back taxes. French media reported that the tech giant paid nearly €500 million in a confidential settlement reached late last year

The Central Bank has opened an investigation into Datalex, the Dublin listed retail software provider to the travel industry, after it issued a massive profit warning last month and revealed that it uncovered a possible accounting issue, The Irish Times has learned. The regulator is understood to be looking into Datalex’s trading statement on November 23rd, which said that the company was performing in line with expectations and was “confident” about posting double-digit percentage earnings growth for the full year.

Staying with the Central Bank, its governor has warned that if the pace of transition to a low-carbon economy in Ireland is too slow, it will pose macroeconomic and financial stability risks as sharper adjustments will be necessary.

A new Facebook- and Google-backed transatlantic telecoms cable tying the Republic to the US and Scandinavia could be operating by the end of the year. Irish communications specialist Aquacomms is seeking a foreshore licence from the Government for an under sea communications cable that will come ashore close to Louisburgh in Clew Bay, Co Mayo.

Apple has reached a deal with French authorities to pay back taxes. French media reported that the tech giant paid nearly €500 million in a confidential settlement reached late last year. Apple’s French business confirmed there was a deal but refused to say how much was paid.

Irish workers are now officially the most productive in the world, adding an average of $99.50 (€87) to the value of the economy every hour they work, according to the OECD. However, as Eoin Burke-Kennedy explains, the figures are not all down to the industrious Irish workers.

The rescue of 100 HMV stores by a youthful Canadian entrepreneur, safeguarding almost 1,500 jobs, is a rare piece of good news for Britain’s beleaguered high street, writes Fiona Walsh in her London Briefing. It also brings a halt, at least for now, to the bewildering spending spree by Sports Direct’s Mike Ashley.

Finally, in her column this week, Fiona Reddan reckons Ireland’s mainstream banks are going to lose out the fintech newcomers by restricting access to free banking services. Young customers are choosing app-based banks with no fees and easy saving options, she argues, and the pillar banks will ultimately lose out.

Dalata hotels posts loss of €112m due to Covid while Pat McCann to step down as CEO 11:43
Ryanair clashes with Cork Airport over costs as base to stay closed until winter ‘at earliest’ 11:18
Global CO2 emissions rising again despite fall last year over Covid-19, says IEA 11:03
Private equity chiefs get bumper payouts on back of US central bank stimulus 10:11
European shares pause as investors take stock of bond market 09:17