Tech review: Can wearing a headband help you lose weight? 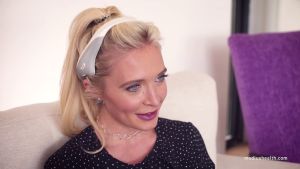 If someone told you that you could lose weight by wearing a headband for an hour a day, you’d rightly give them a sceptical look.

Yet that is exactly what Modius Health says its band will do. Chief executive Dr Jason McKeown is a neuroscientist, who trained at Queen’s University Belfast before setting up Modius.

I have two things currently going against me in my battle to shed the extra pounds that have crept up on me over the past few years. First, I’m permanently exhausted which doesn’t make me feel like joining a gym or heading out for a run every night.

Second, with two small children my eating habits are all over the place. One child will eat anything – as long as it’s on my plate. I’ve perfected the art of ramming a chocolate bar into my mouth whole to avoid detection by the food thieves, who will pick up on the tiniest rustle of a wrapper and will literally take the food out of my mouth. So I eat quickly or I don’t eat at all.

This, I acknowledge, is not conducive to getting rid of the last of the baby weight (which, if I’m honest, is more like takeaway weight at this stage). So if something says it will help – with minimal effort by me – then sign me up.

Modius makes some bold claims. It says it will help make weight loss easier by reducing cravings, decreasing your appetite and making you feel fuller quicker. How does it do it? By stimulating the vestibular nerve, which connects to your hypothalamus and influences appetite and so on.

I’m not a scientist, but the company has research papers to back up its claims. And the company’s founder says he used it himself and lost body fat. Even so, I was slightly sceptical going into this experiment; the idea that wearing the band for an hour a day could help with weight loss sounds like a magic bullet, and we all know how effective they usually are. But the company also warns it is not for those who are looking for a quick fix, instead targeting those who actively want to lose weight. In other words, I shouldn’t expect this to work if I keep up the same unhealthy food habits as before.

To me, it’s more like someone flicking you, and it gets more intense the higher you increase the level

The band itself while not exactly inconspicuous is still subtle enough. The band part is lightweight plastic and rests on your head; two electrodes stick to the hard bony area behind your ears. It is easy to set up, connecting to an app on your smartphone via Bluetooth that allows you to start and end the session or dial up the intensity between one (barely feel it) to 10 (can’t ignore it).

Modius’s documentation says the stimulation feels like a soft tingle behind your ears. To me, it’s more like someone flicking you, and it gets more intense the higher you increase the level – not unpleasant, but not unnoticeable either. Then there is the rocking feeling. When you stimulate the vestibular nerve, it gives you a swaying sensation.

The whole experience is like being on a boat, if someone was flicking you behind the ears repeatedly with a rubber band. The higher the level, the more intense the feeling, although it does settle down after a while. If you suffer from motion sickness, turning it up to level 10 from the start may not be a good idea.

But the crucial question is: does it work? In my experience, yes. I’ve had the band for a while, but for me the effects were quite quick to kick in. It killed off my sugar cravings within the first week. Within two weeks, the weight loss was noticeable. A couple of kilos at first, six altogether in the first two months.

It also helped with sleep, which was an unintended side-effect but a welcome one.

It’s easy to dismiss the effects I attributed to the headset as placebo effect. I expected the headset to work, and so it did. So I stopped using it to see what would happen. After a while, the bad habits came back and the weight slowly crept back on. But that is why you’re supposed to dial down the use of it rather than stop cold turkey.

When I started using it again, it had the same effect: a reduction in appetite and food cravings, and a steady weight loss again. If it’s the placebo effect, it was worth the money.

If you are already looking to lose weight, the band may help tip it over the edge with very little extra effort on your part. You change your eating habits without realising it, which obviously will help you to lose weight.

The not so good:
That swaying feeling can be nausea inducing. It’s not cheap either, plus the band needs disposable electrodes, which can add to the cost.

The rest:
The company recommends you sit down and do nothing while using the band; good advice because when I tried walking around I listed slightly and ended up walking into a wall. It’s a good excuse to catch up on some Netflix. There’s also a 90-day money back guarantee – enough time to figure out if the Modius is for you.

The verdict:
It might not work for everyone, and it won’t work by itself. But wearing a band for an hour a day worked for me.