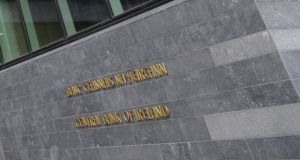 The Central Bank is understood to be looking into Datalex’s trading statement on November 23rd. Photograph: Alan Betson

The Central Bank has opened an investigation into Datalex, the Dublin-listed retail software provider to the travel industry, after it issued a massive profit warning last month and revealed that it uncovered a possible accounting issue, The Irish Times has learned.

The regulator is understood to be looking into Datalex’s trading statement on November 23rd – less than eight weeks before the alert – which said the company was performing in line with expectations and was “confident” about posting double-digit percentage earnings growth for the full year.

A spokeswoman for the Central Bank and a spokesman for Datalex both declined to comment.

Datalex, in which Dermot Desmond has a 26.4 per cent stake, has slumped by almost 60 per cent in value since it warned on January 15th that it expected to post up to a $4 million (€3.5 million) earnings before interest, tax, depreciation and amortisation (ebitda) loss for 2018, compared with analysts’ expectations for an almost $20 million profit.

The shortfall mainly relates to Datalex not being able to recover all of the set-up costs for its biggest-ever project, an overhaul of German airline Lufthansa’s digital commerce offering, as it missed key deadlines and went way over budget.

The company said last month that it remained in talks with the customer, which it did not name, about recovering the excess costs. However, sources have said that the contract, originally agreed in 2016, is much more favourable to Lufthansa. The project was supposed to be live from early 2018, but sources said that it may take until the end of this year before it is fully up and running.

Datalex also revealed in its statement last month that it may have mis-stated revenues and earnings for the first half of last year, mainly due to the “accelerated recognition” of income associated with its biggest customer.

The company’s auditors, EY, warned in its 2017 annual report that “there was a heightened degree of subjectivity applied by management” as it calculated the level of service revenues it could book, based on the estimated the stage of the project. For example, if a project is deemed to be 10 per cent complete in a reporting period, a software company can book 10 per cent of associated revenues in that time frame.

Datalex, where Paschal Taggart is chairman and Aidan Brogan is chief executive, has appointed PwC, its auditor up to the end of 2016, to carry out a review of the circumstances behind the shock profit warning.

While the Central Bank’s securities and markets supervision division is said to routinely look into potential regulatory breaches involving publicly-quoted companies, enforcement actions outside of the financial sector are rare.

The regulator fined beer and cider company C&C €90,000 in 2013 for contravening market abuse regulations by failing to promptly update its list of people working for the group who had access to inside information.

It fined Icon, which conducts clinical trials for the pharmaceuticals industry, €10,000 in 2012 for its failure, as a listed company, to make two announcements in a timely manner.

Datalex said last month it was “confident” that the issues behind the profit warning were a “once off” and that it would return to profit in 2019. It added that it planned to review its financial guidance for this year and update the stock market in early February. The company spokesman declined to give a date for the announcement.