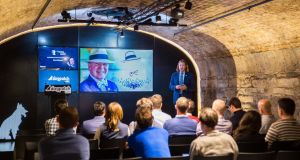 Ireland should focus more attention on developing its agtech start-up scene given the widespread expertise in agriculture, the chief executive and president of Alltech, Mark Lyons, has said.

Mr Lyons was announcing the inclusion of two Irish start-ups in the latest edition of an international agtech accelerator programme established by his father Pearse, who died last year.

More than 250 companies from 53 countries applied for the latest edition of the Pearse Lyons Accelerator, which is to be held at Dublin’s Dogpatch Labs. The programme see applicants working with the animal health company and mentors from Dogpatch to help accelerate their business development.

Unlike many accelerators, the organisers do not demand an equity stake as the price of entry. Moreover, the three-month programme culminates with an opportunity for participants to pitch their business to more than 4,000 attendees at one of the largest agricultural events in the US.

Among the 10 start-ups selected for this year’s programme is Terra NutriTech, a Co Kildare-based company founded by brothers Tom and Padraig Hennessy in 2012. The company has developed an automated mineral dosing system which provides more than 50,000 dairy cows with liquid minerals through their drinking water. Terra raised €2 million in funding in 2018, a year in which it won the overall title at the 2018 National Enterprise Awards.

The Irish start-ups join eight other companies from the US, Canada and Portugal in the accelerator, which covers all aspects of agriculture, including animal welfare, crop health and dairy quality.

Among the other participants selected for the programme are DNA sequencing start-up Biome Makers, lab-grown meat company Higher Steaks, and SwineTech, which has created a solution to reduce piglet crushing.

Since completing the accelerator, alumni companies have collectively raised $36 million.

“Investment in the space continues to increase and while early on it was largely VCs and tech companies, there are more large agricultural businesses now participating. Where a lot of technologies have come in and totally disrupted whole industries, I think that in agriculture, collaboration has tended to be the way forward,” said Mr Lyons.

Moocall, an Irish start-up which participated in the inaugural programme two years ago, said it added $30 million (€26 million) in new qualified sales leads as a result of the accelerator. MagGrow, another Irish participant, recently said it had raised €3 million in a fundraising round.

From Dundalk, Pearse Lyons established Alltech in 1980 and built the Irish-US animal nutrition company into a global empire with annual revenues of about $3 billion.

“We enjoy running the accelerator and think it is important to provide exposure to new technologies as it helps keep the entrepreneurial spirit alive, which is something that very much drove my father,” said Mr Lyons.

Meanwhile, Aidan Connolly, who played a key role in the running of the accelerator in previous years as Alltech’s chief innovation officer, has been appointed chief executive of Cainthus, one of the best-known Irish agtech start-ups. The company, which has developed facial recognition for cows, is based at Dogpatch Labs.