Irish workers now ranked as most productive in world 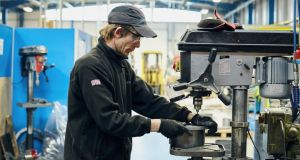 In Ireland, workers add an average of $99.50 (€87) to the value of the economy every hour they work, according to the OECD. Photograph: Suzie Howell/New York Times

Irish workers are now officially the most productive in the world, adding an average of $99.50 (€87) to the value of the economy every hour they work, according to the Organisation for Economic Co-operation and Development (OECD).

The Paris-based agency published figures on Tuesday showing the Republic had the highest rate of labour productivity, effectively economic output per hour of work, of any advanced economy in 2017.

Labour productivity typically measures the value of work done in a given economy over time, with higher value-added jobs generating the greatest productivity increases.

The Republic’s position at the top of the global rankings has a lot to do with the high concentration of multinationals here, which typically drive the biggest productivity gains.

A recent Central Statistics Office report suggested labour productivity here grew by 4.5 per cent on average between 2000 and 2016 with a significant increase recorded in 2015, the same year that saw a massive influx of multinational assets and an unprecedented 26 per cent jump in gross domestic product (GDP), later derided as “leprechaun economics”.

The report also highlighted a gulf between indigenous and foreign-owned firms. Productivity growth among foreign-owned entities averaged 10.9 over the period but was only 2.5 per cent for indigenous firms.

Nonetheless Cantor Fitzgerald economist Alan McQuaid described the OECD’s figures as “very encouraging”, suggesting “that even if things go pear-shaped on the Brexit front, the end result for Ireland Inc may not turn out as bad as some are predicting”.

“In an era of increased automation (which of course in some cases can help workers increase productivity), with machine taking over from man/woman, it is a very positive sign that Ireland tops the league in terms of productivity, suggesting that while we can well and truly party, we also can work very hard,” he said.

While acknowledging the multinational component of the figures, Mr McQuaid said they still left the Republic in a good position in terms of attracting in foreign investment.

“Any business owner looking at moving out of Britain because of Brexit or any other country for that matter, and seeing those productivity figures, would be encouraged to come to Ireland, all other things, such as tax liability, property costs or internet access, being equal,” he said.