Why Huawei is too great a security gamble for 5G networks 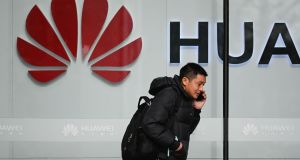 Taking a security bet on Huawei in 5G networks when its main competitors, Ericsson and Nokia, are European no longer feels sensible. Photograph: Getty Images

During the Maoist cultural revolution in China, a young soldier called Ren Zhengfei was sent to the northeastern city of Liaoyang to help build a clothing factory. The temperature at night was 20 degrees below zero and his diet was sorghum and pickled vegetables, but the French factory equipment was a revelation.

“We learnt from the world’s most advanced technology while living a life that could be seen as primitive,” Mr Ren recalled at a recent media event. He later founded Huawei, the world’s biggest telecoms equipment maker, with 87,000 patents and a $15 billion (€13 billion) research budget. A lot has changed in China, but Mao Zedong’s party still rules.

That creates a gaping tension, which for decades the United States tried to manage in the belief that economic growth would gradually beget political freedom. The charges of fraud and theft of trade secrets laid by the US department of justice on Monday against Huawei and Meng Wanzhou, its chief financial officer and Mr Ren’s daughter, show that Donald Trump’s administration has abandoned hope.

Huawei is the casus belli for a broader battle, into which the Ren family has been conscripted. It may have broken US sanctions on Iran and taken technology from Motorola, as the US claims and it denies. It may have committed wire fraud, although that is an all-purpose charge in such cases.

Each is small beer compared with the underlying complaint, that Huawei helps China to spy.

“We are like a small sesame seed, stuck in the middle of conflict between two great powers,” Mr Ren said in his media appearance. There is something to that – Huawei wants to continue its expansion, unaffected by the trade and political tussle. But the seed is not neutral; it is planted on the Chinese side.

Despite whispers in private security briefings and accusations from US politicians, there is no clear-cut evidence that China has ever asked Huawei to create a “back door” into western networks through its equipment, and Huawei insists that it would refuse.

“We would rather shut Huawei down than do anything that would damage the interests of our customers,” Mr Ren said.

The evidence against the Chinese government is open and shut

The problem is structural, not ethical. No matter how trustworthy the Ren family, Huawei would have no choice but to comply if the party knocked on the door. China’s 2017 intelligence law, part of legislation enacted under President Xi Jinping, permits the security apparatus not only to spy on its citizens but to enlist co-operation globally. No would not be an acceptable answer.

China wants to have it both ways: to block US technology companies such as Facebook and Google (and recently Microsoft’s Bing search engine) at home for reasons of security and protectionism, while demanding open access for its information technology enterprises. Zhang Ming, China’s EU ambassador, complains vividly of “slander, coercion, pressure, coercion [and] speculation” against Huawei.

There is a measure of hypocrisy on the US side, of course. Edward Snowden, the US whistleblower, disclosed how its National Security Agency gathered information on national security targets through telecoms networks, and planted back doors in Cisco equipment.

But China is not experiencing unequal treatment when the US excludes Huawei from its digital plumbing.

The question is whether US allies should follow, as Australia and New Zealand are doing by excluding Huawei from next generation 5G networks. The US is pressuring Britain, Germany and others to do the same. George W Bush told allies they were “either with us, or against us” in the war on terror, and President Trump is taking a similar line in the new information war.

The UK has allowed Huawei into the periphery of its 3G and 4G networks – the masts, antennas and other radio equipment to transmit mobile data – while keeping it out of the core, where the customer data and sensitive technology mainly resides. The UK government also makes Huawei submit to having hardware and software checked by specialists.

That line is harder to draw in new 5G networks, which may be embedded in factory equipment and autonomous cars. That technology, which Huawei helped to develop, is more like a mesh in which data are widely distributed.

“You can interfere with quite a lot of it by interfering with a small amount,” says Alan Woodward, a computer science professor at the University of Surrey.

This brings us back to Liaoyang and the sophisticated machinery that Mr Ren set out to emulate. Like other Chinese companies, Huawei probably took some shortcuts along the way by reverse-engineering rival products, but it has climbed the value chain sufficiently to be a leader now. If it hailed from another country, the case against it for state espionage would fail.

The evidence against the Chinese government is open and shut, though – the party that sent Mr Ren to Liaoyang values its political power above everything else and requires complete loyalty.

Taking a security bet on Huawei in 5G networks when its main competitors, Ericsson and Nokia, are European no longer feels sensible. I feel rather sorry for Mr Ren but he is a product of the system.