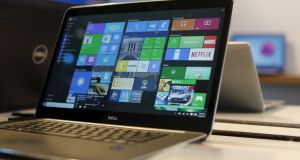 Microsoft is encouraging users to migrate to Windows 10. Photograph: Reuters

The Health Service Executive (HSE) and countless other Irish organisations have been warned of increased security threats and potentially huge additional costs issues arising from their widespread use of the Windows 7 operating system.

Windows 7, which was launched in 2009, is still used by many Irish organisations, among them the HSE, which late last year stated in a tender document that it had more than 50,000 users still using the operating system.

Support for the operating system is scheduled to end early in January 2020 as Microsoft seeks to encourage more organisations to upgrade to Windows 10. While the tech giant is expected to provide some additional support beyond this date, as it did previously when it stopped offering security updates for Windows XP, companies have been warned that this will likely be at a heavy cost.

Irish-owned technology services company Auxilion said that companies that continue to use Windows 7 once security patches have stopped being issued, face significant malware risks. Its head of digital services, Martin Patterson, also warned of the need for Irish organisations to upgrade to Windows 10 sooner rather than later.

“Depending on the size of the organisation, migration can take 12 months or longer,” Mr Patterson said.

“Businesses don’t really have a choice when it comes to Windows 10 migration. The only question is when. Delay means additional cost and the risk of working with an unsupported operating system and outdated hardware,” he added.

According to recent figures from Statcounter, nearly 30 per cent of internet access was still conducted via Windows 7 in December.

Mr Patterson said much of this traffic likely comes from corporate users as consumers have been quicker to adopt Windows 10 than businesses. He warned public sector organisations face significant costs if they continue using Windows 7, citing the £5.5 million (€6.3 million) previously paid by the UK government to support Windows XP for an additional year in 2014.

“One of the reasons for the slow upgrade to Windows 10 is that Irish organisations remember the complexity in moving from Windows XP. Software as well as hardware issues need to be addressed,” said Mr Patterson.

The HSE told The Irish Times that it continually works to maintain and upgrade its systems.

“As providers qualify their solutions on modern desktop operating systems, such as Windows 10, the HSE will deploy these,” a spokeswoman said.

Microsoft itself previously warned users to migrate from Windows 7 as far back as early 2017.

In a blog post that was subsequently deleted, Markus Nitschke, head of Windows at Microsoft Germany, said Windows 7 “does not meet the requirements of modern technology, nor the high security requirements of IT departments”.