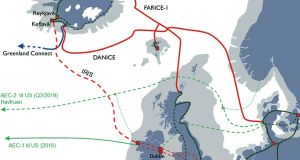 A map showing the Irish landing point for the Iris cable

The Republic could be in line to get a direct connection to a new high-speed undersea fibre optic internet cable linking Iceland to mainland Europe.

The Telecommunication Fund of Iceland and Farice, which already operates two submarine cables, have signed an agreement to undertake seabed survey work on a new link that will travel either through the Republic or via Britain.

The Irish route would travel from a new landing point in Co Mayo through to Dublin and then across the Irish Sea to London via north Wales. The alternative route would go through Scotland and down to London.

The Republic is already home to multiple submarine cable landings due to its geographic location with landing points in Counties Mayo, Cork, Wexford and Dublin.

A third submarine cable Greenland-Connect links Iceland to Canada and US.

The Icelandic government said the fourth cable would “increase further the security and resiliency of Iceland’s international telecommunications.”

The new proposed cable, codenamed IRIS, would likely depart from Reykjanes peninsula, Farice said. While the seabed survey will take place this year, Farice said no further decisions have yet been taken for the actual build of the link.

ISPreview.co.uk said the initial research phase for the survey is expected to cost about £1.6 million (€1.8 million) with the actual build estimated to reach as much as $32 million depending on which route is selected.