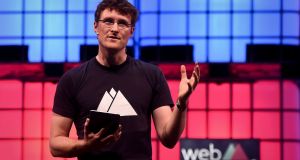 Paddy Cosgrave didn’t have the successes he has had to date by sitting on his hands and accepting what others told him was possible.

Web Summit founder Paddy Cosgrave has clearly picked up publicity nous from the US tech leaders with whom he rubs shoulders. His press conference on Thursday in Dublin’s Shelbourne hotel – equal parts press event, techie social gathering and civil discussion – was like a mini Silicon Valley product launch.

Healthy food laid on for the attendees, with a general air air of conviviality? Check. Main man arrives fashionably late, generating a sense of of anticipation? Check. Tying the company into a broader narrative inspired by a sense of social purpose? Check again.

In terms of new facts to report, the press event included confirmation that Moneyconf will take place in the RDS next year, and that the conference is in Dublin for the “forseeable future”. That was it as far as company news went.

More interesting was the revelation that Cosgrave is rallying senior tech leaders to sign an open letter to the Irish government urging it to pass anti-corruption legislation.

Without directly naming them, he appeared to suggest that he had discussed it directly with global leaders from the biggest US tech firms located in Dublin.

If Cosgrave can convince the leaders of the likes of Facebook or Google to sign an open letter implicitly criticising the State for its dearth of anti-corruption laws, then he can convince anybody to do anything.

It seems implausible that such global companies, who have long worked hand in glove with this State, would put Government leaders in such a tough position in PR terms.

But Cosgrave didn’t have the successes he has had to date by sitting on his hands and accepting what others told him was possible. So we will see. At the very least, his anti-corruption comments have gotten Moneyconf some handy free publicity – this article is proof.

What possibly jarred with the timing, however, was a well thought out column in The Irish Times on Friday from former ESRI head John FitzGerald, who argued that contrary to media and public perception, corruption levels in Ireland are actually low by international standards.

A Cosgrave at odds with a FitzGerald. Where have we he heard that one before?