Cantillon: Controversies prove there is no substitute for good corporate governance 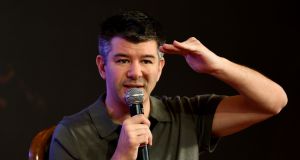 The departure of Travis Kalanick from the company he founded – and the promise of bold reform – did not come a minute too soon.

The litany of scandals that has engulfed lift-hailing app Uber over recent years finally came crashing down on the head of its chief executive on Wednesday.

The departure of Travis Kalanick from the company he founded – and the promise of bold reform – did not come a minute too soon.

The take-home message from this whole sorry mess is that no matter how good an idea or concept an entrepreneur might have, there is just no substitute for proper procedures and good corporate governance.

Not to mention resisting the temptation to make sexist jokes, and ensuring sexual harassment has no place in the organisation.

Cantillon is reminded of the former American Apparel founder Dov Charney who walked the plank in 2015 following a whole series of controversies and indiscretions.

On one occasion, he was caught dancing naked in front of two female employees in his office. He, unsurprisingly, faced a number of lawsuits from ex-employees.

In 2009, an American Apparel store manager said Charney didn’t want “ugly people” working at his company. “Anyone he deems not good-looking enough to work there is encouraged to be fired,” said the manager.

Kalanick, however unsavoury, isn’t in Charney’s league, but he has met the same fate in terms of having founded a hugely successful company that eventually forced him out the door.

Some estimates have put the number of Uber drivers globally somewhere between 500,000 and a million. The company is valued at nearly $70 billion and operates out of 54 countries worldwide.

Let this be a lesson to start-ups everywhere. Success – and particularly astronomical success – brings its own challenges. Not least with the temptation to believe your own hype.

Allowing a sense of invincibility to develop can quickly turn to sour arrogance, and with that comes a muffling of the alarm bells that sound for most people when dodgy things start happening within the company.

All of this is too little too late for Kalanick – and good riddance.