Government fears that if tax case is overturned, Apple could seek recompense 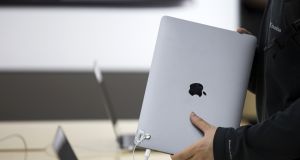 As a US-listed company, Apple would generally employ a more aggressive investment policy on its funds than a sovereign state. Photograph: Bloomberg

The Government is pressing Apple to agree not to sue it if it fails to deliver sufficient returns or accrues losses on €13 billion it must collect and hold in escrow pending the outcome of a massive European Union tax case.

The State fears that, in the event the case is overturned, there is a risk that Apple could seek recompense for any difference between the returns the tech giant might have generated on the original €13 billion, and the returns the State achieved while it held it in escrow.

As a US-listed corporate entity with demanding shareholders, Apple would generally employ a more aggressive investment policy on its funds than a sovereign state. Apple would likely generate higher returns than state officials in normal market conditions on the €13 billion were the money to stay in its hands.

It is understood that while in State hands, the €13 billion cannot simply be managed with a mirror version of Apple’s investment policy.

If Apple loses the case, the cash could ultimately end up being shared with other European states.

The Republic is effectively seeking an indemnity against legal action if Apple were to argue in future there was a shortfall due to the difference in investment approach. Talks are ongoing between Apple, the State and commission to allocate between them any risk that might arise.

Paschal Donohoe, the Minister for Finance, said the Department of Finance was in contact with the EC on the issue, and said both parties are aware of the work either side is doing.

“We have work underway now in relation to the tendering process in relation to how such an account might be managed later on in the year,” Mr Donohoe said.

In an order that reverberated across the Atlantic, the commission last year slapped Apple with the multibillion-euro bill, saying Ireland granted unfair deals that reduced the company’s effective corporate tax rate.

The commission said last month that the State needed to step up its efforts to recoup about unpaid taxes from Apple or it could end up in court. The money was due to be collected by a January 3rd deadline. The Government is preparing a tender seeking offers to collect and manage the money, Mr Donohoe said in Dublin on Thursday.

Ireland has used indemnities before to protect itself. The Strategic Banking Corporation of Ireland was part funded by a German state-owned development bank when the SBCI was set up in 2014.

As part of that process, the Government agreed to make good potential losses the Germans might suffer. In turn, the Department of Finance is entitled to claim losses back from the SBCI.