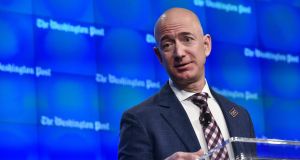 For so long the e-commerce standard bearer and enemy of shop-keepers everywhere, Amazon. com – not satisfied with sniping from the sidelines – is going behind enemy lines with a series of investments in bricks and mortar outlets.

The company unveiled plans on Friday to buy upmarket US grocer Whole Foods Market in a massive $13.7 billion (€12.24 billion) deal. The $42 a share all-cash purchase includes the group’s debt.

When Amazon was founded more than two decades ago, the internet was still in its infancy – but Jeff Bezos, the company’s founder, had little doubt it was where the future of retail would be built.

Today, though, you might be forgiven for thinking he’s changed his mind. Certainly, it would appear to Cantillon that Bezos sees the future as slightly more nuanced than the vista of couch-bound online shoppers ordering everything from fast food to films online.

While some traditional retailers may feel vindicated, that sense of self-satisfaction should be shortlived. This move is likely to bring more bad news for retailers who have endured many a sleepless night cursing Amazon and its influence on their business. Indeed, shares in competitors sank in early New York trading.

On top of the Whole Foods Market deal, Amazon has unveiled plans for a constellation of book shops around the US – stepping in to replace the very bricks-and-mortar booksellers it drove out of business with its online offerings.

Despite mixed reviews, Amazon opened its seventh shop last month in the Time Warner Centre at Columbus Circle in New York, and plans to open another this year. The invasion is nationwide too, with six more shops planned for Bellevue, Washington; Paramus, New Jersey; and San Jose, California.

But Whole Foods, which has been feeling the heat to bolster its stock for more than a year, has a new owner with cash to burn, significant technological expertise, and a willingness to invest aggressively in a quest for dominance of a brand new sector.