What’s getting cheaper in your local supermarket?

Cost of cola drops by as much as 10%, but fresh fish price hikes batter shoppers 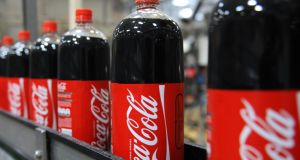 A survey of 30,000 products stocked in supermarkets across Ireland shows that prices are trending downwards. But where are the biggest price drops - and which goods are increasing in price?

First the price drops. According to Kantar Worldpanel, compilers of the information, the biggest price cut noted in the 12 weeks to March 26th 2017 was for bottled colas, with the cost of goods such as 2 litre bottles of Coca-Cola and Pepsi dropping by as much as 10 per cent. Biscuits are also getting cheaper, falling by as much as 8 per cent during the period, while frozen veg fell by 8 per cent.And, after a supply crunch, the cost of coffee has also eased, falling by 6 per cent during the period under review.

However, while the overall trend may be towards falling prices, the latest Kantar survey does point to significant price pressures in certain areas. The cost of fresh fish for example, rocketed by 12 per cent during the period, while its canned counterpart jumped by 4 per cent. Herbal teas and packet soup also rose substantially in price, both up by 8 per cent, with sugar up by 5 per cent. The cost of a bottle of wine is also on the rise, up by 3 per cent in the latest survey.