Unilever to offload Flora and Stork in latest cost-savings plan 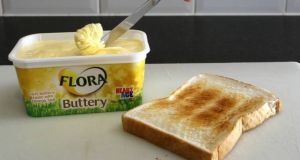 Unilever says the future of its underperforming spreads business “now lies outside the group”.

Unilever promised a multibillion euro programme of shareholder rewards on Thursday after a corporate rethink sparked by a takeover approach from Kraft Heinz, aiming to prove it can generate lucrative returns as an independent company.

Under a restructuring sparked by the rebuffed $143 billion offer by its US rival, the group set out an accelerated cost-saving plan, the sale of its Flora to Stork spreads business where sales are declining, and a review of its dual-headed Anglo-Dutch structure.

Unilever will also splash out €5 billion on a share buyback and raise its dividend 12 per cent this year.

Chief executive Paul Polman also signalled the company might be interested in the food brands being sold by Reckitt Benckiser.

Chief financial officer Graeme Pitkethly said Unilever would consider combining its dual-headed structure – in Britain and the Netherlands – into one, in order to make future large-scale transactions easier. It said a review on the matter would be finished by the end of the year and would not be impacted by Brexit. – Reuters