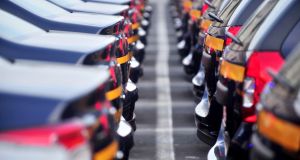 The number of new private cars taxed for the first time fell 14.5 per cent in March compared to the same month last year.

The number of new private cars taxed for the first time fell 14.5 per cent in March compared to the same month last year. It partly reveals the extent of the problem facing the motor trade this year, which is scrambling to boost sales figures by pre-registering cars or selling large batches to fleet and hire-drive operators.

The CSO data differs from the latest new car registration figures for the same three-month period. These showed that 75,945 new cars were registered for the first time this year, down 8.3 per cent on last year.

The sizeable difference of 15,192 new cars is partly due to the fact that all vehicles must be registered before they go on the road, but it is up to the buyer to sort out their motor tax. In the case of hire firms, cars may be bought and registered but not yet taxed as they have yet to go on the road.

Demonstrator models and so-called “pre-registration” vehicles – cars registered to meet sales targets but not yet sold to the public – also contribute to the difference in figures.

According to the latest new car registration figures, Toyota is the best-selling new car brand, ahead of Ford, Volkswagen and Hyundai.

Meanwhile, the CSO shows Volkswagen is the most popular car brand with 13.2 per cent of the new cars licensed for the first time this year, ahead of Nissan with 10.8 per cent, Hyundai with 9 per cent, Ford with 8.2 per cent and then Toyota.