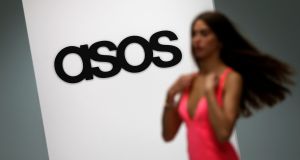 British online fashion retailer Asos raised its guidance for full-year sales growth after it reported a better-than-expected 38 per cent rise in its first half, driven by accelerating international demand.

The company, which has more than 14 million active customers, said on Tuesday that full-year retail sales would rise by between 30 and 35 per cent, up from its previous 25-30 per cent guidance. It reported retail sales of £889.2 million (€1.04 billion) for the six months to end-February, beating consensus of £879 million. Pretax profit rose 14 per cent on £27.3 million on total group revenue of £911.5 million.