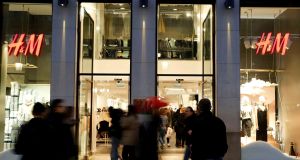 H&M’s inventory levels are up 30 per cent year-on-year and profit will be hurt should the retailer have to offer deeper discounts. Photograph: Regis Duvignau/Reuters

Hennes and Mauritz (H&M) said price cuts to clear inventory over the next three months may exceed last year’s, sending the shares tumbling to a four-year low.

H&M’s inventory levels are up 30 per cent year-on-year and profit will be hurt should the retailer have to offer deeper discounts, said Michelle Wilson, an analyst at Berenberg.

Sales in the year to date haven’t lived up to H&M’s expectations, chief executive Karl-Johan Persson said in an interview, adding that a goal for annual sales growth of 10 to 15 per cent has become more challenging.

The Swedish company is struggling to keep pace with Zara owner Inditex, which has put a greater emphasis on e-commerce and has proved more adept at responding to shifts in consumer tastes.

Mr Tervonen said markdowns will be “more aggressive” if sales don’t improve in April and May.

The retailer said it will open its first Arket outlet in London in autumn, selling clothing and a limited range of home furnishings at prices slightly above the company’s main brand. Stores in Brussels, Copenhagen and Munich will follow, and the brand will also sell online, initially in 18 European markets.

H&M said first-quarter pretax profit fell 3.6 per cent to 3.21 billion Swedish kronor, ahead of the average estimate of SKr3.03 billion. The beat was driven by better product buying and fewer markdowns, said Richard Chamberlain, an analyst at RBC Europe.

The fast-fashion retailer gets about 80 per cent of its products from Asia, where the dollar’s strength has inflated the cost of purchases of garments, as many currencies in the region are linked to the currency. Hand M also said it’s battling with weaker sales in central and southern Europe and in the US.