Hornby looks to get back on track following restructuring 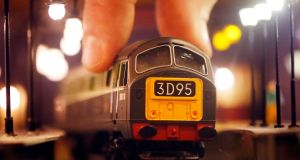 Hornby has said the first stage of its turnaround plan has been completed, with the troubled toymaker showing early signs of a recovery.

A string of profit warnings had resulted in Hornby’s shares plummeting over the past year as the firm struggled with falling sales.

Hornby which makes Scalextric, Airfix but is best-known for its model railways, has embarked on a painful turnaround which has seen it reduce product ranges and cut back on investment as part of plans to shore up its balance sheet.

Hornby said on Friday that it had restructured its UK and European operations, resulting in “structural improvements to the cost base”.

Hornby also said revenues in the fourth quarter showed an improving trend and that it had re-engaged with its core independent retailer base as part of the new strategy.

The toymaker flagged “sound” underlying trading and said it was confident in the momentum ahead of the next phase of its turnaround plan.

However, Neil Wilson, senior market analyst at ETX Capital, said: “It has completed phase one: placing the group on a sound financial footing. It now needs to grow the brand. This could be more challenging.”

1 Nama sets deadline for final bids on former glass bottle site in Ringsend
2 Aviation lessors experience extreme turbulence
3 Will pandemic payment give me PRSI stamp as retirement looms?
4 Fears for Dublin jobs as Oracle believed to be cutting 1,300 roles
5 Eurobonds are not the answer to coronavirus woes
6 Chopra warns coronavirus will have ‘deeper’ impact than financial crisis
7 Providence raises $3.3m as deal over key asset progresses
8 Coronavirus: Berlin ready to aid EU economy, says Merkel
9 Nice to see you: Which is the best video calling option around?
10 Major building projects could be delayed two years after Covid crisis
Real news has value SUBSCRIBE