Liam Hanly succeeds Conor Whelan and his priority is €7.5m investment plan to 2020 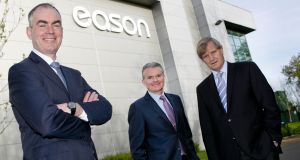 Irish-owned books and stationery retailer Eason has appointed Liam Hanly as its new managing director. Mr Hanly will take over the role in June, succeeding Conor Whelan who has decided to step down after more than 7½ years in charge of the business.

Mr Hanly joined Eason in 2010 and has been responsible for group finance, IT and logistics. He previously held senior management positions in a number of Irish retail and wholesale businesses including McCabes Pharmacy, Xtravision and Irish Merchants/Bunzl.

Staff were informed of his appointment on Monday morning.

Speaking to The Irish Times, Mr Whelan said he informed the board of Eason earlier this year of his decision to step down. Mr Whelan has “no concrete plans” for his future career but intends to take some time off to travel with his family.

Mr Hanly said his priority would be to implement the €7.5 million investment strategy out to 2020 that was recently signed off by the board of Eason, the country’s biggest book seller.

This includes a €750,000 investment to complete the upgrade of its flagship shop on O’Connell Street.

Commenting on the transition, Eason chairman James Osborne said: “Since his appointment as managing director in 2009, Conor Whelan has brought huge energy and commitment to the business.

“Together with Liam, the leadership team and the wider Eason team, he has led and successfully developed and implemented successive strategies that have transformed the business and the store estate, driven greater employee engagement and facilitated a significant new innovation programme all of which has helped grow the Eason brand, market share and retail footprint across the island of Ireland.

“The board and I are very pleased to have someone of Liam Hanly’s calibre to take over from Conor . . . [He] brings a wealth of retail knowledge and experience of the business.”

Mr Whelan said he hoped his legacy to the business would be the professionalisation of the company’s management team, the refreshing of its brand and store network, and the upgrade and modernisation of its IT systems to cater for the challenge of digital retailing. About €30 million has been invested in Eason during his time as managing director.

Eason has 65 stores across the island of Ireland, including 28 franchise outlets. It also operates a wholesale division, which services independent retailers across the country. The privately owned company employs about 1,000 staff, and has a turnover in excess of €220 million.