Losses rise to €12m from €2.5m due to costs associated with Dixons merger 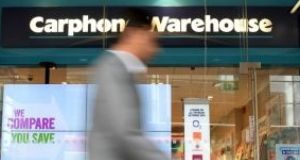 Carphone Warehouse Ltd, the Irish arm of the European-wide retail group, reported a €12 million pre-tax loss for the 12 months ending April 2016, versus a €2.5 million loss a year earlier.

Accumulated losses rose to €50.6 million from €38.6 million in the prior year.

The shareholders’ deficit totalled €5.3 million, as against a €6.7 million surplus the previous year.

Following its link-up with Dixons, the new group rolled-out a new 3-in-1 store concept that entailed merging remaining PC World and Curry stores and inserting a Carphone Warehouse outlet, in a move that reduced the group’s UK and Ireland store portfolio by 76.

The retailer had operating lease commitments totalling €74.4 million at the end of April 2016, down from €80.6 million a year earlier.