Irish groceries getting cheaper on back of weak pound

Groceries have dropped in price for the first time since May 2015; Supervalu is back as Ireland’s largest supermarket 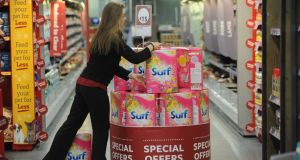 Supervalu is back on top in the latest Kantar survey, with a 22.6 per cent market share. (Photograph: Aidan Crawley)

The cost of your weekly shop is getting cheaper, with figures from Kantar Worldpanel showing that the declining pound means that groceries are dropping in price for the first time since May 2015.

According to Kantar Worldpanel, grocery prices fell by 0.7 percentage points in the 12 weeks to March 26th to -0.2 per cent.

David Berry, director at Kantar Worldpanel, attributes the decline to the impact of the weakened pound following the EU referendum as the price of British imports drops.

“For the first time since May 2015 grocery prices are falling so consumers are likely to have a little extra cash to hand, though this doesn’t necessary mean they’ll spend more in store. Many will see the break from inflation as a chance to cut down their grocery costs and pocket the savings instead,” he said.

Supervalu back on top

Meanwhile, Supervalu has regained the title of Ireland’s largest grocery store having been pipped to the post by Dunnes Stores for the past two months. It returns to the top spot with a 22.6 per cent market share, ahead of Dunnes’ 22.3 per cent share, although the value of its sales dropped by 1.4 per cent in the 12 weeks to March 26th.

“The battle to attract shoppers remains fierce as ever as Supervalu makes its way back to the number one spot,” Mr Berry said.

Shoppers continue to seek out cheaper own-label goods rather than more expensive branded food products, with the latest survey showing that these goods now account for 54 per cent of total grocery spend – up 6 per cent in the past four years.

“Supervalu and Tesco have both responded and expanded their own-label ranges. The retailers see this as a real opportunity for growth, with own-label lines offering them the chance to set themselves apart from the rest,” Mr Berry said.

However, going against the tide is Dunnes Stores, which has actively sought out new brands, adding names like Sheridan’s Cheese and James Whelan Butchers in recent times. And customers appear to like this approach, with own-label sales accounting for just 38 per cent of sales this year - up only 1 per cent since 2013 - at the retail giant. Moreover, despite losing market share, sales at Dunnes Stores continue to advance, growing by 3.2 per cent year-on-year – the 30th consecutive period of growth for the retailer - as consumers remain enticed by the retailer’s shop and save voucher scheme.

Among the discount retailers, Lidl saw a 3.7 per cent jump in sales, but Aldi remains Ireland’s fasting growing retailer, with sales growing by 5 per cent. The retailer increased its market share to 11.3%, closing the gap with its closest rival Lidl to just 0.1 per cent.