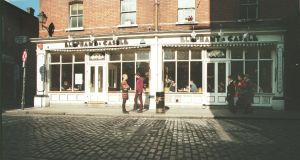 Press Up is working on opening two new restaurants in Rathmines and Monkstown under the Elephant & Castle brand, after buying the original outlet in Temple Bar (above) late last year. Photograph: Frank Miller

Paddy McKillen jnr’s Press Up Entertainment group, the country’s largest and fastest-growing pub and restaurant group, is eyeing opportunities to enter the UK market in the medium term as it courts potential investors before a potential initial public offering (IPO).

Market sources say the company’s Wowburger franchise and recently-acquired Elephant & Castle restaurant business would be the most obvious brands that could be launched in the UK in the next three to five years.

The company’s growing boutique hotels operation could also easily be expanded across the Irish Sea, they said.

A spokeswoman for the company, which was set up by Mr McKillen jnr and Matt Ryan at the depths of the recession in 2009, confirmed that it might expand into the UK.

Earlier this month, The Irish Times revealed that Press Up was considering an IPO as it hired Goodbody Stockbrokers to help assess funding options for the group. The company’s collection of about 30 businesses includes the Dean Hotel in Dublin, the Workman’s Club on the south quays of the river Liffey, and the Stella cinema in Rathmines.

Press Up is working on developing new hotels in Dublin, Cork and Galway as well as opening two new restaurants in Rathmines and Monkstown under the Elephant & Castle brand, after buying the original outlet in Temple Bar late last year.

The company, in which Mr McKillen jnr owns a 50 per cent stake and his developer father Paddy McKillen holds 25 per cent of the stock, has held so-called early-look meetings with potential investors in Dublin and London in recent weeks.

Sources said the company and its advisers would need to move at pace if they were to proceed with a stock-market flotation before mid-July, when capital markets start to wind down for the summer. They noted that the next window for a transaction would open between September and October.

The owners of Press Up, which also include Mr Ryan and Liam Cunningham, a long-time associate of Mr McKillen snr, are considering raising as much as €60 million of fresh equity for the business through an IPO.

They may also sell some of their existing shares in the market at the same time, but intend to retain a combined majority stake in the business following any such deal.

It is understood the company has not ruled out the private sale of a stake to an investor. An outright sale of the business is not being considered, according to the company.