No happy endings guaranteed, but bookselling in Ireland is ‘in good health’ - report 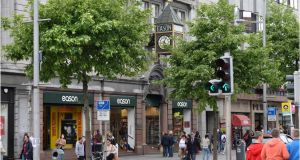 The financial strains suffered by bookshops make for a familiar plotline, but there could yet be a twist in the tale. Irish booksellers are seeing hints of a recovery in their revenues, despite competition from online giant Amazon and the negative effect of a weaker sterling, according to a new report by economist Jim Power.

Some 234 bookshops in the Republic support 1,796 full-time jobs directly and a further 1,437 jobs in the wider economy, delivering a gross wage bill of €32.3 million, Power found. His report, which was commissioned by Bookselling Ireland, was previewed at its annual conference in Dublin today and will be published in full later this year.

Booksellers, excluding Amazon, have collective revenues of €98 million, almost two-thirds of which is from Dublin shops. When the supply chain is included, the sector’s turnover reaches €132 million. It directly contributes €6.6 million to the Exchequer in taxes and local authority payments.

“It is very clear that, despite the challenges of recent years, the Irish bookselling sector is in good health and is making a strong economic and financial contribution to the Irish economy,” Mr Power said.

“Apart from the economic and financial contribution, the social and cultural impact is huge. No Irish town is complete without a good bookshop.”

“Bookselling Ireland is delighted to have hard facts to prove the value and the impact of bookselling to the Irish economy, and to the central role bookshops play in Irish society and culture,” said chairman Frank Kelly.

“Ireland is a nation of writers and readers and we look forward to working with the Government, the trade and the media to help them understand the true fiscal, societal and cultural impacts we have, and how much poorer the Irish economy and landscape would be without us.”

Bookselling Ireland has campaigned in recent years for some Government policy supports for the sector, where smaller retailers typically operate under narrow margins.

Although the Irish book market saw positive momentum in 2016 and 2017, sales are still below a peak of €165 million recorded by Nielsen Bookscan in 2008, while bookshops continue to face an existential threat from global ecommerce behemoth Amazon, which employs about 2,500 people in Dublin.