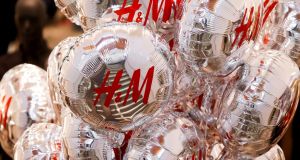 H&M reported its lowest first-quarter profit in 16 years as the Swedish fashion retailer accumulated a record pile of unsold garments worth more than $4 billion (€3.2 billion).

Operating profit fell 62 per cent in the three months through February, missing analysts’ estimates, as inventory rose to 17.6 per cent of annual sales. The stock dropped as much as 3.8 per cent after the company warned that markdowns will be higher this quarter because of the backlog.

H&M’s already-downbeat forecast for the start of 2018 was exacerbated by unseasonably warm European weather in January followed by February’s cold snap, whipsawing the clothing retail industry. That forced the company to slash prices even more to try to clear inventory.

Last month, H&M forecast sales in comparable stores to drop this year and return to growth in fiscal 2019. The retailer is adding a new brand called Afound to sell clothes from various brands including H&M at a discount, and it’s adding three automated logistics centres this year to become faster at delivering to stores.

“Many of our ongoing initiatives are giving good indications and results, even though they have not yet been implemented at a large enough scale to have a decisive effect on the overall results,” chief executive Karl-Johan Persson said in a statement Tuesday. “The H&M group will achieve a somewhat better result for full-year 2018 compared with the previous year.”

H&M also said it began online sales in India and launched H&M on Alibaba Group’s Tmall service in China, and both projects have started well.