UK may ban use of credit cards for gambling 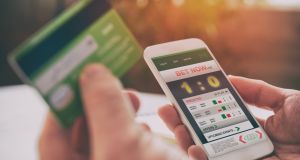 Gambling companies say credit cards fund 10-20 per cent of the total their customers bet with them.

The UK Gambling Commission says that it fears allowing wagering on credit cards increases the risk that consumers will bet more than they can afford.

“We will consider prohibiting or restricting the use of credit cards and the offering of credit but will explore the consequences of doing so,” the commission says in its review of online gambling.

A credit card ban could hit Irish-based Paddy Power Betfair, which has a significant online business in the UK. It also faces other regulatory pressures, such as a likely limit on what British bookie shop customers can stake in betting machines.

Australian authorities recently banned credit betting, but the move did not affect Paddy Power Betfair’s business in that country, as it does not offer credit to customers.

The UK watchdog acknowledges that a credit-card ban could force consumers to use riskier and costlier credit such as high interest pay-day loans.

“We intend to conduct further work on gambling using credit in order to develop a more comprehensive understanding of the issues before setting out some options in a consultation,” the review adds.

The commission notes that gambling companies indicated that credit cards fund between 10 per cent and 20 per cent of the total that their customers bet with them.

David Jennings, analyst with Davy, said that this would be material to a business such as Paddy Power Betfair.

Nevertheless, he noted that the Gambling Commission’s proposal was only “very preliminary” and stressed that Paddy Power Betfair faced more pressing issues, such as the betting machine review.

The Irish group has about 300 betting shops in Britain whose turnover could be hit if the commission imposed tough restrictions on the amounts that can be wagered in the machines, known as fixed-odds betting terminals (FOBTs).

Some observers believe the commission will cut the maximum FOBT stake to £2 from £100.

Paddy Power Betfair’s exposure to this is far lower than that of rivals such as Coral Ladbrokes or William Hill.

The Irish company’s former chief executive, Breon Corcoran, wrote to the British government suggesting that the limit be cut to £10.

The Gambling Commission’s review also points out that banks only issue credit cards after checks on customers. However, the commission notes the UK Citizens’ Advice organisation suggests that more than a million people are in financial difficulty because banks increased their credit limits without their knowledge.