Shoppers like strategy of housing Currys, PC World and Carphone Warehouse in one location 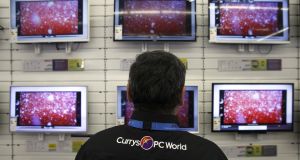 High-tech chain Currys PC World’s business in the Republic is poised for a record 2018 after turning the corner last year, earning a profit of €6.36 million.

Accounts just lodged by the company show that it earned profits before tax of €6.365 million over the same period, compared with a loss of almost €25 million during the previous 12 months.

Currys PC World employed 421 people selling computers, laptops, tablets and other equipment in 18 stores across the Republic at the end of April last year.

The company said that, following two years of streamlining its business, Currys is now on track for a record financial year in 2018.

Record sales in the period stretching from the pre-Christmas “Black Friday” promotion to the new year will aid this performance. Sales during those weeks rose 12 per cent year-on-year and were the highest in the company’s history.

Mark Delaney, managing director of the company’s parent, Dixons Carphone Ireland, which also owns Carphone Warehouse, noted that the 2017 results reflected careful management of the business over the past two years.

The company began introducing its three-in-one stores, which house Currys, PC World and Carphone Warehouse under one roof, in 2016.

Mr Delaney explained that these stores helped the business maintain and grow market share in key areas including computers, electronics and white goods such as washing machines and other household appliances.

“While turnover increased slightly, crucially, like-for-like sales were up 9.8 per cent in 2017,” he said.

“Consumer confidence remains high and in particular we see major growth potential in the restoration and redecoration sector of the housing market as consumers look to revamp their properties,” Mr Delaney added.

The balance sheet shows that net assets stood at €1.3 million on April 29th 2017 against a deficit of €6.4 million a year earlier.

Total liabilities were €26 million, €11.5 million of which was due to other group companies.

1 Hurrah for the companies giving staff more time off
2 RTÉ to seek 70 voluntary redundancies as ‘large costs’ beckon in 2021
3 Covid-19 will worsen shortage of accountants, says CPA Ireland
4 ‘We lost money on our planned wedding in Spain. Covid saw to that’
5 Some Irish money market funds came close to danger in March
6 Policy failed us during the banking crisis and it’s failing us again
7 How long can Government afford to keep State pension age at 66?
8 Sustainable investment: How your pension can help tackle climate change
9 Aryzta to pursue asset sales as takeover talks fail
10 Samsung patriarch Lee Kun-hee dies at 78
Real news has value SUBSCRIBE