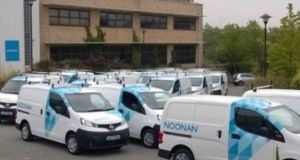 The largest proportion of Noonan Services Group’s revenues came from cleaning and facility services, which accounted for 54 per cent of income.

Pretax profits at the Noonan Services Group increased by 128 per cent to €11.56 million last year.

Newly-filed accounts for the 18-month period to the end of June last show that revenues at the Noonan Services Group Ltd increased by 48 per cent to €290 million compared with €195 million for the prior 12-month period.

The largest proportion of the group’s revenues came from cleaning and facility services, which accounted for €157.2 million or 54 per cent of income.

The second-largest contributor to revenues was ‘man-guarding services’ that accounted for 26 per cent or €77.34 million of revenues while revenues from building maintenance services totalled €35.9 million.

South African conglomerate Bidvest agreed to purchase the Dublin-based contract cleaning and facilities management business in a €175 million deal in 2017.

The accounts show that the new owners started to claw back some of their investment with the firm paying a dividend of €3.38 million in November 2018.

The business recorded a 47 per cent increase in operating profits to €15 million in the 18 months to the end of June last and finance costs of €3.4 million reduced the group’s profits.

The business recorded post-tax profits of €10.36 million after paying corporation tax of €1.2 million.

At the end of June last, the group’s shareholder funds totalled €117.57 million that included accumulated profits of €22.8 million.

The profit for the 18 months take account of non-cash depreciation costs of €3.4 million.

On the risks facing the business, the directors state that the risk of unrealistic increases in wages or infrastructural costs impacting adversely on the competitiveness of the company and its principal customers remain a concern.