Services sector activity slows to lowest level since May 2013 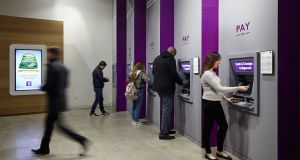 Financial services was one sector where activity grew in January, according to the latest AIB Ireland Services PMI.

Activity in the Irish services sector fell to its lowest level since May 2013 in January, as new order and employment growth slowed.

It was the fourth successive month of a reduction in growth for the AIB Ireland Services PMI, which declined to 54.2 in January 2019, down from 56.3 in December.

New order growth eased at the start of 2019 to its slowest pace since October 2016, amid reports of softer customer demand. At the sector level, technology, media & telecoms (TMT) entities posted the fastest increase in overall new business. The rate of job creation eased from December to a 10-month low at the start of 2019.

Oliver Mangan, AIB chief economist, said that the index reading of 54.2 in January “still represents a strong pace of expansion in the sector”, and is ahead of the European average, with growth reported in two of the four sectors in the survey, financial services and business services.

“Overall, though, the January AIB Services PMI signals a somewhat slower start to 2019 for the economy, after the robust rate of expansion recorded in the past number of years. It suggests that growth in the Irish economy is likely to slow this year, which is hardly surprising given the loss of momentum in the global economy in recent times,” he said.

Separately, the Central Statistics Office said the seasonally adjusted monthly services value index fell by 4.3 per cent in December, when compared with November, while in the year to December it fell by 6.6 per cent.

The largest decrease over the month was reported in the administrative and support service sector (-28.3 per cent); followed by information and communication (-6.9 per cent); other service activities (-4.4 per cent); and professional, scientific and technical activities (-0.2 per cent).

The biggest movers going in the opposite direction were transportation and storage (+1.9 per cent); wholesale and retail trade (+1.1 per cent); and accommodation and food service activities (+0.2 per cent).