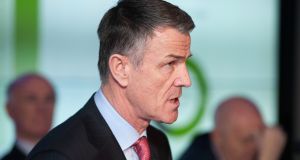 UDG told shareholders at its annual general meeting on Tuesday that it expected earnings to grow between 4 per cent and 6 per cent during the current financial year, which ends on September 30th.

Chief executive Brendan McAtamney confirmed UDG had received a legal claim from McKesson arising from that company’s purchase of the Irish group’s United Drug distribution business for €407 million in 2016.

“We received what we believed to be a pretty weak claim from McKesson. We do not believe it has any merit,” he told shareholders.

Mr McAtamney added that, because UDG did not think the claim had any merit, the company was unable to calculate any potential liability resulting from it.

He indicated that McKesson was bidding to use commitments and guarantees given by UDG at the time of the United Drug sale to claw back some of what the US company paid for the business.

Mr McAtamney was answering questions on a statement in UDG’s annual report, which noted that the group was investigating the claim and had “engaged” with McKesson, but could not determine its likely impact.

After the meeting, he explained that the process was still at an early stage. “We will find out what we find out, but we will defend any legal action vigorously,” he said.

UDG sold United Drug to McKesson as it shifted from distribution to more profitable activities, such as packaging and selling pharmaceuticals for manufacturers.

Its chief executive said it was likely the group would buy two or three businesses in its current financial year, in line with what it has done previously.

“We are very active. We have three dedicated M&A people,” he said. Mr McAtamney stressed that UDG was willing to do deals only at what it believed was the right price.

During the meeting, chairman Peter Grey pointed out that UDG had considered 10 potential acquisitions in 2018, but had completed only two. He explained that the group had walked away from most of them as they were too expensive.

“There are lots of opportunities, but they are very, very highly priced,” Mr Grey said.

Both the chairman and chief executive reassured shareholders that the UK’s imminent departure from the European Union posed little direct threat to the company, which has businesses in Britain, Europe and the United States.

They explained that the main threat from Brexit was its potential impact on the economy generally and the likely consequences of that for UDG’s businesses.

1 Provisional liquidator appointed to Dublin engineering firm
2 How can I view my dead brother’s will if I’m not the executor?
3 Kerry trading profit rises 12.1% in year of mega-deal miss
4 Bursting of Tesla bubble a case of ‘not if, but when’
5 Finance Ireland plans stock market flotation in May
6 Bank of Ireland staff in line for 2.95% pay increase
7 Must you pay a price for ethical investment?
8 US reiterates opposition to Huawei equipment being used for Irish 5G
9 Irish Reits would benefit from property funds overhaul, Davy says
10 Finance Ireland’s IPO, Huawei and Irish 5G, and pay rises at Bank of Ireland
Real news has value SUBSCRIBE