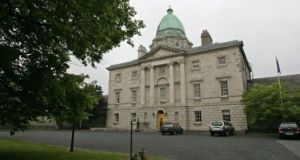 The number of solicitors with Irish practising certificates (PC) rose by 4.8 per cent to 10,972 last year, with McCann Fitzgerald, Mason Hayes & Curran and Arthur Cox leading the way among top law firms in the State, according to figures being published on Monday in the Law Society Gazette.

“These growth rates are hardly surprising, given the buoyant economy in Ireland in 2018,” said Ken Murphy, director general of the Law Society of Ireland, in the article, adding that expansion may ease back this year, partly due to Brexit.

The Government estimates that gross national product (GNP), a measure of economic growth that strips out the effect of multinational profits, grew by 5.9 per cent last year and will rise by a further 3.9 per cent in 2019.

McCann Fitzgerald, the fourth-largest law firm in the State by number of practising solicitors, saw its number increase by 31 last year to 278, according to the Law Society Gazette data.

Mason Hayes & Curran’s roll-call of practising certificate holders rose by 26 to 227, while Arthur Cox, the largest firm, registered an increase by 20 to 294.

Freshfield Bruckhaus Deringer, one of the world’s largest law firms, ranks 13th on the list, with its number of holders of certificates, at 78, falling by eight on 2017. Freshfield’s position “is somewhat misleading, as the practising certificate holders remain based in their offices in London and Brussels”, according to Mr Murphy. “The firm has no office in Ireland nor, it has said publicly, any plan to open one here.”

The level of holders of practising certificate is well below the number of some 18,000 individuals on the Roll of Solicitors in Ireland. The Law Society said in December that number of England and Wales solicitors registering in Ireland jumped from 50 in 2015 to 806 in 2016, the year of the Brexit referendum.

An additional 547 enrolled in 2017 and 601 registered by the middle of November last year, at which stage a further 256 applications were being processed.

4 Who are Ireland’s 17 billionaires?