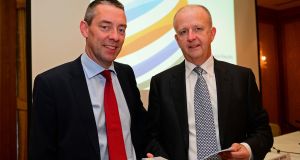 Sales, marketing and support services group DCC is “actively looking for opportunities” in relation to mergers and acquisitions, its new chief executive said on Friday.

Goldman Sachs said in January that DCC had the “financial headroom” to spend close to £1 billion (€1.2 billion) on mergers and acquisitions.

Donal Murphy, who was speaking after taking the helm of the company from Tommy Breen at yesterday’s annual general meeting, said he was “keen” to deploy capital in all sectors in which the company operates.

“We have to be very measured in terms of what we say on the acquisitions side,” he said. “We are very active and will remain very active looking for the right opportunities. We are keen to deploy capital in the sectors that we operate.

“In the divisions as they are now – liquid petroleum gas, retail and oil, healthcare, and technology – we’re actively looking for opportunities to deploy capital in each of those sectors. That remains our focus.”

Mr Murphy also said there was unlikely to be any major changes to the company’s strategy following the change in leadership.

“While there’s change, obviously with Tommy moving on, there’s not a lot of change because we’re a really close-knit team,” he said. “We’ll continue to operate on that basis.

“Last year was a very big year for us both in terms of growth and the deployment of capital. We have those acquisitions we announced towards the latter part of the last financial year that will only kick in towards the end of this financial year.”

In an interim management statement ahead of the agm, the company said each division of the group had traded in line with expectations and ahead of the prior year during the first quarter ended June 30th.

The sale of DCC Environmental, which was announced on April 5th, was completed on schedule on May 30th.

In terms of the rest of the year, DCC said its profits were “significantly weighted” towards the second half of its financial year.

“At what is still a very early stage in the financial year, the group reiterates its belief that the year ending March 31st, 2018, will be another year of profit growth and development,” it said.

“Were current foreign exchange rates to prevail for the remainder of the year, the group would benefit modestly, relative to current market consensus, from a favourable translation of non-sterling profits into sterling.

“The processes to complete the acquisitions of Esso Retail Norway and Shell Hong Kong & Macau are progressing to plan and are expected to complete by the end of the third and fourth quarters of DCC’s financial year respectively.”