Watchdog must enforce laws on organised crime of price-fixing 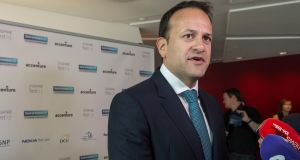 Taoiseach Leo Varadkar. The answer to price-gouging is to give extra resources to the Competition and Consumer Protection Commission. Photograph: Brenda Fitzsimons

More than 100 years ago, before refrigeration, ice routes were a source of income for organised crime in the United States. The system was simple: ice had to be delivered in large blocks to food businesses that needed it. So the mob decided who got an individual delivery route and then charged protection to frighten off competition and guarantee the operator a monopoly.

Of course it was the businesses that needed the ice, and their mainly working-class customers, who ultimately had to pay for the inflated rates charged to support the gangsters’ extortion.

Until refrigerations became affordable, the system was lucrative. The Mafia was a very effective barrier to entry. One of the beneficiaries in New York was John Torrio, a boss who later became Al Capone’s mentor. It also violated laws dating back to 1890 designed to protect competition in the US, which recognised that monopolies were bad for everybody.

It took the Republic more than a century to catch up. We introduced meaningful competition laws only in 2002, and even then it was at the European Union’s behest. For years we accepted as natural that monopolies should provide all sorts of services, air travel, public transport, energy, to name a few.

We also put up with legitimised price-fixing, such as the Groceries Order, which limited competition in the price of food. Politicians spent much of their time opposing reform and protecting vested interests that feared competition.

Small wonder then that domestic and EU authorities are investigating our motor insurance industry, or that consumers fear bin companies will use new rules as a cover for price-gouging.

The answer to this is not to create yet another regulator, which will simply end up as another underfunded and impotent office. Instead of wasting our cash on this, we need to give extra resources to the Competition and Consumer Protection Commission, and tell it to get on with meaningful enforcement of existing laws meant to prevent behaviour such as price-fixing and price-gouging.

We also need a cultural change among our politicians, who make the laws, and judges, who administer justice, so that they finally recognise competition-law offences for what they are: serious and organised economic crimes that enrich the few at the expense of the many.