Half of DPD Ireland parcel deliveries due to online shopping 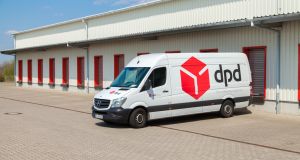 Almost 50 per cent of parcels delivered by DPD in Ireland were to personal customers as a result of online shopping, according to the delivery company.

This a significant shift from the patterns seen in 2012 when over 90 per cent of deliveries by the firm were made to businesses.

To respond to the growth pattern, the French-owned delivery firm has invested over €13 million in a facility which can facilitate online grocery shopping, an industry valued at €170 million in Ireland.

Accounts being filed with the companies office show that turnover at the Irish arm of parcel delivery firm DPD grew by 13 per cent to just over €70 million in the year to the start of January 2017. Cost of sales for the same period increased by 7.7 per cent.

In what appeared to be a successful year for the company, pre-tax profit rose by over 45 per cent to just over €8 million while the delivery company paid an effective tax rate of 10.5 per cent.

Creditors for the period were owed €10.7 million, down by 29 per cent on the previous accounting period while net assets jumped by over 27.7 per cent.

“The company’s growth is a reflection of the focus we place on innovation in delivery”, said Brendan O’Neill, chief executive of DPD Ireland.

“Through continuous investment in and development of technology and operations, we have streamlined the delivery process.”

DPD Ireland currently employs almost 1,000 staff throughout its network as a whole. It said that it expects to carry over 16 million parcels this year.