Worldpay shares soar on bids from Vantiv and JPMorgan 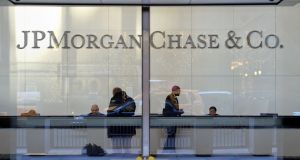 JPMorgan and Vantiv have bid for payments processor Worldpay.

The bid approaches show how automated payments specialists have become attractive targets for credit card companies, banks and technology firms seeking to capitalise on the growth in popularity of paying by smartphone or other mobile devices.

Danish payment services company Nets A/S, said over the weekend that it had also been approached by potential buyers.

Worldpay, which sells technology to businesses so they can take payments via cards, online or on mobile devices, said the approaches were preliminary and there was no certainty of any deal. Sources close to the company said the offers were unsolicited.

Worldpay’s shares hit record high. At noon the shares were up 25.4 per cent. The company has a market capitalisation of about £6.43 billion p according to Thomson Reuters data.

“We believe Worldpay is a unique asset and the current interest from two US peers could also trigger the intention of parties like Google, Amazon, Apple,” a note from Mediobanca Securities said.

Vantiv and JP Morgan now have until August 1 to announce firm intentions to buy or else walk away. Vantiv could not immediately be reached for comment. JP Morgan declined to comment.

The payment processing industry has grown rapidly as consumers shun cash. The number of non-cash transactions rose 8.9 per cent in 2014 to reach $387.2 billion, according to Capgemini’s World Payments Report.

While banks have been trying to develop and buy more sophisticated technology, payment service companies like PayPal and Worldpay gained a large part of the market share during the e-commerce boom.

Set up in 1989, Worldpay was spun out of British bank Royal Bank of Scotland to private equity firms Bain Capital and Advent International in 2010.

The buyout firms listed the company on the London Stock Exchange in late 2015, when it was valued at £4.8 billion.

Deal activity in the payments industry has so far been dominated by smaller companies being merged into divisions of bigger groups. Earlier this year, an analyst at Pacific Crest Securities said the emphasis may instead shift towards scale, noting Worldpay and Vantiv as a compelling deal.