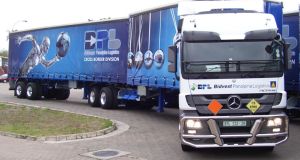 Johannesburg-listed Bidvest told its investors earlier this month that it was in acquisitive mode.

London-based private equity firm Alchemy Partners, which took control of Noonan Services in 2008 in a €90 million deal, put the company back on the market earlier this year and is seeking between €170 million and €190 million for the business.

It was not clear on Tuesday evening whether Alchemy would enter a period of exclusivity with a preferred bidder before announcing a deal, which is expected soon.

While The Irish Times had previously reported that the European arm of Miami-based private equity firm HIG Capital was also among three final bidders for Noonan, sources said talks with Bidvest were most advanced.

Spokesmen for Bidvest, which has a large facilities management business in Africa, Alchemy and Noonan Services, whose clients range from AIB to hospitals and sports stadiums, declined to comment.

Noonan Services, which was set up in 1977 by Limerick man Noel Noonan to provide contract cleaning services to both the Irish public and private sectors, has seen its revenue treble to more than €300 million since its takeover by Alchemy almost a decade ago, as the group expanded in Ireland and the British market.

Management in Noonan Services, including chief executive John O’Donoghue, chief financial officer Declan Doyle and corporate development director Fintan Connolly, continue to own a minority stake in the business, even after Mr Noonan and six members of his family sold out as part of the Alchemy deal.

Johannesburg-listed Bidvest told its own investors earlier this month that it was in acquisitive mode, with an ongoing appetite for bolt-on deals as well as having “adequate headroom to accommodate larger acquisitive and organic expansion opportunities, which we are actively seeking, both locally and internationally”.

It is understood that Bidvest has been working with corporate finance executives at South African-owned Investec in Dublin. Alchemy hired US financial services company Baird Capital last year to advise it on a potential transaction.

In 2014, Noonan Services bought Resource Group, a Northern company employing more than 6,000 people across the UK that was in administration at the time.

More recently, the group acquired the security services business of Brinks in Ireland last year, while it snapped up the business and assets of UK security firm Shield Guarding earlier this year from Indian company Topsgrup.

The company’s most recent set of annual accounts filed with the Companies Registration Office show its earnings before interest, tax, depreciation and amortisation (ebitda) rose to €15.8 million in 2015 from €12.2 million for the previous year.

Net bank debt at the group fell to 0.7 per cent times ebitda in 2015 from 2.3 times in 2014 and the company predicted last year that it would continue to pay down borrowings at speed during 2016.

Aramark, the US group which entered Ireland in 2004 with the purchase of Campbell Catering before buying Avoca Handweavers in 2015, was among the final list of bidders for Noonan Services the last time it was on the market in 2008.

While there had been speculation in industry circles that Aramark was involved in the current process and the most likely successful suitor, a number of sources have said it was not among the final bidders.