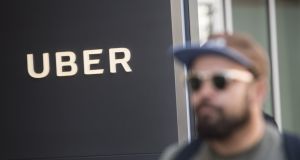 Mr Kalanick’s departure was linked to some Uber shareholders’ desire for an IPO. Photograph: Bloomberg

The upheaval at Uber will leave the next chief executive facing an even bigger challenge in how to solve one of the main conundrums about the company: how does the business of booking a car actually make money?

Uber is the most loss-making private company in tech history, and the next chief executive will be under pressure to accelerate the company’s efforts to reduce losses.

During the past four quarters, Uber’s operating losses were more than $3.3 billion (€2.9 billion) on a measure that excludes interest, tax and share-based compensation - a figure that dwarfs other famously loss-making companies such as Amazon.

The way Uber sees it, booking a car is a commodity product, and the company’s goal is to be the biggest and lowest cost provider of that product.

To achieve that goal, Uber initially focused on supercharging its markets by injecting huge amounts of capital to attract drivers and riders. That strategy has been successful in achieving tremendous growth: Uber’s revenues were $3.4 billion in the first quarter of this year, triple the levels of the year prior.

During the past four quarters revenues were $9.1 billion, which is more than Twitter or Tesla, and investors valued the company at $62.5 billion last year.

However, the challenge now will be to shift Uber’s model from one that has been very successful at revenue growth, to one that is more financially sustainable and, eventually, profitable.

Some economists say there was no obvious way to do that, even before the extra challenges Uber now faces as the company rebuilds its C-suite and tries to recover from a series of crises, including the resignation of Travis Kalanick as chief executive earlier this week.

“There is no clear pathway I can see for Uber to go from a high-revenue growth company to a profitable company,” says Aswath Damodaran, a professor of finance at the Stern School of Business. “Normally the story for start-ups is that as revenues grow economies of scale will kick in, but that story is tough to tell with Uber.”

Furthermore the leadership vacuum at Uber has left a question over one of its main advantages, the ability to raise ample money at low cost.

Cash in the bank

Uber has between $6.5 billion to $7 billion of unrestricted cash in the bank, with a further $2.3 billion untapped line of credit. This could cover the company’s cash needs for roughly three more years, extrapolating from its losses during the first quarter of this year.

Uber’s path to sustainability will depend on controlling the company’s two main costs: the subsidies for drivers and riders, and general costs such as engineering and research and development.

These general costs benefit from economies of scale - as Uber grows, the overhead becomes less expensive on a per-ride basis.

The subsidies are essential because Uber uses these as levers to maintain a two-sided transportation marketplace, one that balances driver demand and passenger supply. Sign-up bonuses attract new drivers and maintain a sufficient driver pool, while more specific bonuses for certain times and places help steer drivers to places of high demand.

These incentive payments typically come down on a per-ride basis as a new market matures. However, the tenacity of Uber’s rivals has meant that the company has not been able to eliminate them altogether.

Even in the US, its biggest and oldest market, Uber was not profitable last year, partly because it had to fight off a fresh push from its smaller rival Lyft.

That onslaught has continued this year as Lyft raised fresh funds and benefited from the #DeleteUber campaign: Uber’s market share has fallen from 84 per cent at the beginning of the year to 77 per cent at the end of May, according to Second Measure, a research group that analyses credit card data.

The fact that switching costs are so low between one service and the other - both drivers and riders can easily flip between the apps - means that it can be hard for Uber to defend its market dominance.

Nevertheless the company did succeed in narrowing its global operating losses in the first quarter of this year to $708 million, from $990 million the previous quarter.

One area where Uber and Lyft have been experimenting with a different revenue model is through subscriptions - offering a monthly membership “pack” to frequent riders. (One example might be a $20 monthly fee that buys the rider 20 shared rides for $2 each.)

Subscription models could make sense if - as Uber and Lyft hope - more urban dwellers ditch their private cars and use Uber and Lyft instead, particularly in cities that lack good public transport.

The fantasy for both companies is that car-booking usage will surge, making private car ownership a thing of the past (right now ride-hailing accounts for just 0.4 per cent of passenger car miles travelled in the US, so there is still some way to go).

“Subscription models are always very beneficial,” says Santosh Rao, head of research at Manhattan Venture Partners. “There is visibility, it is a nice recurring revenue model. To the extent that they can get it, that is great.”

As their markets begin to mature, investors in both companies have come to believe that ride-hailing is not a winner-take-all market, but rather one in which multiple companies can coexist.

Mitchell Green, an Uber investor and a partner at Lead Edge Capital, says that his thesis is that the ride-hailing market will keep growing - and both Uber and Lyft will benefit.

He draws an analogy to telecoms companies. “There is absolutely room for multiple players, like AT&T and MCI, there is not going to be one player in the market.”

This shift has become even more paramount after Mr Kalanick was ousted earlier this week by a group of investors who want the company to pursue an initial public offering. “The new management means we are probably a little bit closer to the big IPO than we were before Travis left,” says Rohit Kulkarni, managing director at SharesPost.

As Uber’s new chief executive grapples with the unusual dynamics of the ride-hailing market, they will also have to make sure Uber lives up to investors’ expectations. With a valuation of $62.5 billion, there is a lot riding on the question of how ride-hailing can make money.