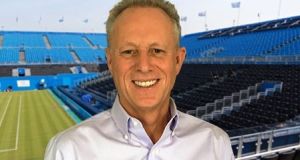 Greg Lawless, chief executive of Arena Events Group, which supplies hospitality tents to the Wimbledon tennis championship among others, plans to raise €68 million through a London Stock Exchange flotation

Arena Events Group, a provider of temporary structures and seating at major sporting and outdoor events, including the Cheltenham races, the HSBC Abu Dhabi Golf Championships, the US Open, the PGA Championship and Glastonbury music festival, traces its origins back more than 250 years.

Mr Lawless (57), a chartered accountant, worked with Davy between 1987 and 1992 before joining Irish distribution company Allegro, where he was part of a management team that bought out the business in 1993. The company was sold on seven years later.

Following four years in consultancy, Mr Lawless acquired an event and party hire company, Hireall, with his former business partner, Dermot Divilly. They subsequently bought similar businesses in Ireland and Britain, culminating in the 2007 purchase of Arena Structures and Seating.

Mr Divilly sold his interest in the Arena Group in 2012 as MML Equity Partners and Sports Investment Partners came on board as investors.

“We believe the listing will not only raise our international profile but will enable us to provide additional incentives, by way of a share option scheme, for our senior executive team around our global operations,” said Mr Lawless.

“The new funding leaves us with a significantly stronger balance sheet and provides us with necessary funding that will help us to continue to grow the business both organically and by way of potential acquisitions.”

Arena Events Group has 750 employees across 14 international bases across Europe, the US, Middle East and Asia.

The origins of the group date back to 1781 when a company was set up by Sir Richard Edgington to make and sell tents, flags, banners, ship ropes and decorations and public events. The group provided over £30 million of products and services for the 2012 London Summer Olympic Games.

Mr Lawless’s stake will be diluted from 18 per cent to 3.6 per cent by share sale and flotation, according to stock exchange filings published on Tuesday.