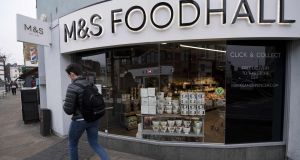 M&S will pay Ocado £750m for a half share in the venture. Photograph: Justin Tallis/AFP/Getty Images

Marks & Spencer unveiled on Wednesday plans to launch a rights issue and slash its dividend as it forges a joint venture with Ocado to take the high-street retailer into the online grocery business.

M&S will pay Ocado £750 million (€871 million ) for a half share in the venture, which will use Ocado’s “smart platform” technology and trade as ocado.com. M&S will contribute branding and sourcing. Ocado will retain the other half share and gets to nominate the venture’s chief executive.

At that point groceries from Waitrose – which has supplied Ocado since its inception in the early 2000s, and received about £15 million in sourcing fees in the online retailer’s last financial year – will disappear from the Ocado site.

M&S said the pact would be “primarily” funded with equity. The board plans to conduct a rights issue to raise up to £600 million, while the group will also reduce its dividend by 40 per cent to a “sustainable level from which to grow in line with earnings over time”.

Steve Rowe, M&S’s chief executive, denied he had overpaid. “We think we’re paying a fair price for a fully aligned business with shared common goals ... We are partnering with the leader, the global leader, in online technology and delivery. This is really the only way M&S could have moved food online,” he told reporters on a conference call.

Shares in M&S were 7.7 per cent lower in early trading while Ocado shares were up 6 per cent.

Citi analyst Adam Cochrane said that for M&S, the transaction was “an expensive but arguably necessary way to enter the market in the short term”, but offered long-term potential.

“The rights issue and dividend cut will come as a surprise to many,” he added – with the dividend reduction suggesting M&S is planning more heavy investment in either the joint venture or its existing store estate.

The payment will be £562.5 million in upfront cash and a deferred payment of £187.5 million plus interest five years after completion, depending on the satisfaction of certain financial and operational conditions.

Ocado said the proceeds would fully fund the development of all fulfilment centres it has committed to build for clients including Casino in France, Kroger in the US and Sobeys in Canada.

Ocado also said the profitability of its retail business would have been reduced by £50 million to £34 million had the joint venture structure been in place during its last financial year.

“The £50 million is a combination of fees for technology and mechanical handling systems plus services provided, a management fee for running the operation and some recovery of the cost of historic assets that are now being used exclusively,” said Duncan Tatton-Brown, Ocado’s finance director.

However, he added that the venture would incur lower levels of ongoing capital spend and that the restated profit number did not include benefits from the combination. “We do not expect this to be the joint venture profitability going forward,” he said.

Mr Rowe of M&S said he expected about £70 million of synergies from cost savings and increased buying power. He also said the venture would have access to M&S data, including from its seven million loyalty card holders. He added that the rights issue and dividend cut were “part of the financing of the deal and a way of making sure our balance sheet is appropriate and in line with our earnings”.

Bernstein analyst Bruno Monteyne noted that the venture had also committed to more fulfilment capacity, equivalent to eight new warehouses over the next 12 years, and said the future fee income for Ocado’s solutions business effectively added another £1 billion to the overall value of the transaction.

Tim Steiner, the co-founder and chief executive of Ocado, said he expected a positive reaction from customers to the switch in supplier. “We are absolutely confident we will acquire more customers.”

“I have got messages from customers since the talk first started saying ‘Please do it’... We have done very extensive consumer research that suggests customers are very happy with it,” he added.

Waitrose own-label products account for about 10 per cent of Ocado’s entire range, but a quarter of its sales.

Mr Steiner added that the tie-up with M&S would not affect Ocado’s existing arrangements with WM Morrison, which had been kept informed of developments. – Copyright The Financial Times Limited 2019

1 Election 2020: Parties' pledges on housing simply don’t add up
2 Britain after Brexit will not be alone, but it will be lonelier
3 Pensions: Estonia plans to unleash a potential €4.85bn on economy
4 Banks withdrawing from ATMs – another failure of regulation
5 Boeing posts first annual loss since 1997 as Max costs skyrocket
6 Getting out from under ‘never-ending’ Celtic Tiger debt burden
7 Marlet snaps up 1.8 acre Sandyford site for €17m
8 Orange Capital Partners acquires prime Dublin rental portfolio for €75m
9 EU member states allowed to restrict Huawei from 5G networks
10 It’s getting easier and more profitable to be green
Real news has value SUBSCRIBE