While pub generates sales from tourists, 75% of its business comes from Irish people 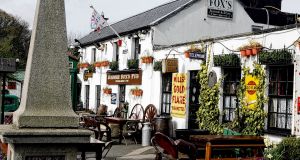 The brand name of Johnnie Fox’s pub in Ireland is the main reason behind the pub’s continued success here.

That is according to the business manager Kaitlin McMahon who was commenting as new accounts show that accumulated profits at Fox’s Pub Ltd more than trebled to €292,966 from €94,880 in the 12 months to the end of last March.

Ms McMahon said that most people believe that the pub generates its sales from tourists but 75 per cent of its business comes from Irish people and their friends and relatives.

She said the business enjoyed a very strong year in spite of the impact of the Beast from the East at the start of last March. The pub was effectively shut for five days as snow and ice made it accessible only to locals.

Ms McMahon is a member of the McMahon family that has operated the pub for about 30 years. She said: “Business last year was very strong and we are hoping for an even better year in 2019.”

Only 420 people live within a radius of 2.5 miles of the pub that is situated 12 miles from Dublin, but the pub manages to attract large crowds to the venue 12 months of the year.

Over the years, the pub has provided hospitality to seven heads of state, six prime ministers and a list of celebrities including Brad Pitt and Angelina Jolie. Former Iraq hostage Brian Keenan enjoyed his first pint back in Ireland at Johnnie Fox’s after his release from captivity in Lebanon in 1990.