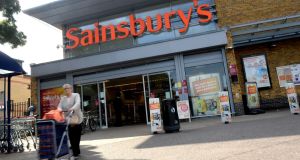 Britain’s competition regulator has dealt a potentially fatal blow to Sainsbury’s planned $9.5 billion (€8.37 billion) takeover of Walmart’s Asda, saying it was unlikely the companies would be able to address its “extensive” concerns about the deal.

Shares in Sainsbury’s plunged as much as 16 per cent on Wednesday after the Competition and Markets Authority (CMA) said its provisional view was the deal should be blocked or require the sale of a large number of stores, or even one of the brands.

The deal, which would create a company with annual revenue of about £51 billion pounds (€58.5 billion), more than 2,800 stores and a grocery market share of 31.2 per cent, also gave the world’s biggest retailer Walmart a way to exit the British market, one of the weakest performers in its portfolio.

But the CMA said it had “extensive” concerns about the plan as it could lead to a worse experience for in-store and online shoppers through higher prices, a poorer shopping experience and reductions in the range and quality of products offered.

It was “likely to be difficult for the companies to address” those concerns, it said, adding it was also worried prices could rise at a large number of Sainsbury’s and Asda petrol stations.

Sainsbury’s said it fundamentally disagreed with the findings. “We will fight right the way through the process,” its chief executive Mike Coupe said.

Smaller rival Morrisons, which could benefit from two of its rivals being distracted by a takeover and the exit of Walmart, fell 4 per cent, while Tesco’s shares were little changed.

The CMA will now seek responses and submissions from all interested parties ahead of a final report due by April 30th.

Bernstein’s Monteyne said the provisional findings were likely to lead to a closer focus on Sainsbury’s underlying trading performance, which has been weak, and the challenges it would face as a standalone company.

“Enough worries to make the shares nearly uninvestable in the next few months,” he said.

The CMA’s objections contrast with the relatively easy passage given to Tesco’s takeover of Britain’s biggest wholesaler Booker, which rivals and some analysts had argued would give Tesco an almost unassailable position in UK retail.

“The CMA has moved the goalposts and its analysis is inconsistent with comparable cases,” Sainsbury’s said.

“We will be working to understand the rationale behind these findings and will continue to make our case in the coming weeks.”

Under the takeover plan, Walmart would receive £3 billion pounds and take a 42 per cent stake in the combined business. Walmart has the option of selling down to 29.9 per cent after two years and exiting completely after four.

The two groups have said they would lower prices on “everyday items” by around 10 per cent, financed by cost savings from big suppliers.

Both companies have declined to say how many forced store disposals would make the deal unattractive, but a source with knowledge of the two firms’ thinking has told Reuters a figure “into the hundreds” could scupper it.