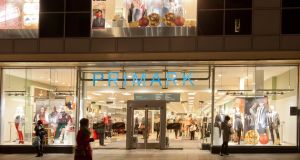 Associated British Foods, which owns the Primark clothing chain and trades as Penneys in Ireland, said it expected a small reduction in adjusted operating profit for the 24 weeks to March 2nd. Photograph: iStock

Associated British Foods expects to deliver first-half revenue growth in all of its businesses, other than sugar, helping it to deliver earnings per share broadly in line with the previous year.

The group, which owns the Primark clothing chain and trades as Penneys in Ireland, as well as major grocery, agriculture and ingredients businesses, said it expected a small reduction in adjusted operating profit for the 24 weeks to March 2nd, offset by lower net financial expenses.

For the full 2018-19 year the group’s outlook was unchanged with adjusted operating profit and adjusted EPS expected to be in line with 2017-18.

The group said Primark’s first-half sales were expected to be up 4 per cent, with increased selling space partially offset by a 2 per cent decline in like-for-like sales.

With a much higher margin, Primark’s profit was expected to be “well ahead” of the same period last year. Early trading of Primark’s new spring/summer range had been “encouraging”.

The company said the UK continued to perform well and “we substantially increased our share of the total clothing, footwear and accessories market, with sales 2 per cent ahead of last year”.

“In Germany we have strengthened management and plan focused marketing to address trading which continues to be difficult,” the company said. “Preparations are underway to reduce selling space at a small number of German stores in order to optimise their cost base.”

In the US, the business continues to “perform strongly”, driven by “excellent trading” at its recently-opened Brooklyn store.

AB Foods cautioned last year that profit in its sugar business would be significantly lower this year reflecting lower EU sugar prices for contracts negotiated at the end of the last financial year. – Reuters

1 Dublin housebuilder records €11m gain after striking deal with bankers
2 Boeing identifies new software flaw in grounded 737 Max
3 ‘Life in Vilnius reminds me of Ireland in the 1990s’
4 Festive season boosts footfall at Arnotts and Brown Thomas
5 Real price of cheap credit? Unaffordable homes
6 Barclays to cut 100 senior roles as lender seeks to rein in costs
7 Irish people like nothing more than being bribed with their own money
8 Hogan warns Britain on US trade deal as EU set to impose tariffs
9 GoMo is being investigated by advertising authority
10 ‘We stuck our heads in the sand for a long time’
Real news has value SUBSCRIBE